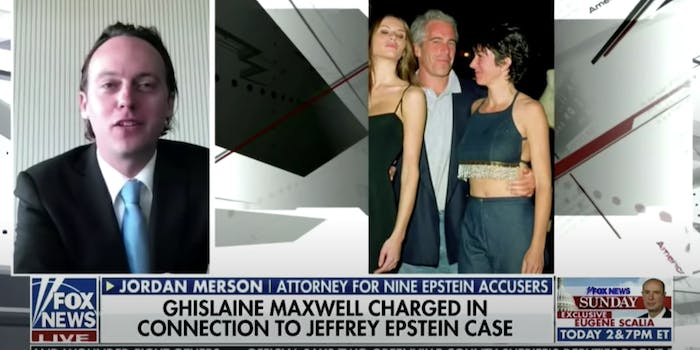 The photo shows them at Mar-a-Lago.

Fox News cropped out President Donald Trump from a picture with Jeffrey Epstein for its Sunday news segment.

The picture, which has been circulated widely beforehand, shows the convicted sex offender with Trump, Melania Trump, and Ghislaine Maxwell, who allegedly helped Epstein groom teenage victims. The segment was about the FBI’s recent arrest of Maxwell, who has been charged with sex trafficking children.

The original photo is on Getty images and can easily be found online. The picture was taken at Trump’s Florida Mar-a-Lago club in February 2000, two years before Trump infamously called Epstein a “terrific guy” who likes “beautiful women…on the younger side” during a New Yorker interview.

The photo was also taken well after Epstein allegedly raped numerous girls or “lent” them to powerful men in the 1990s.

People began to point out the edit on Twitter. The photo still shows Melania Trump but crops out the president.

“No biggie,” Twitter user @TeaPainUSA wrote about the media company editing the picture. “Fox News has been editin’ reality out of the Trump administration for three and a half years.”

Epstein had connections with a number of powerful people––from former President Bill Clinton to U.K.’s Prince Andrew. He died by suicide in a New York jail as he waited for trial for charges of sex trafficking.