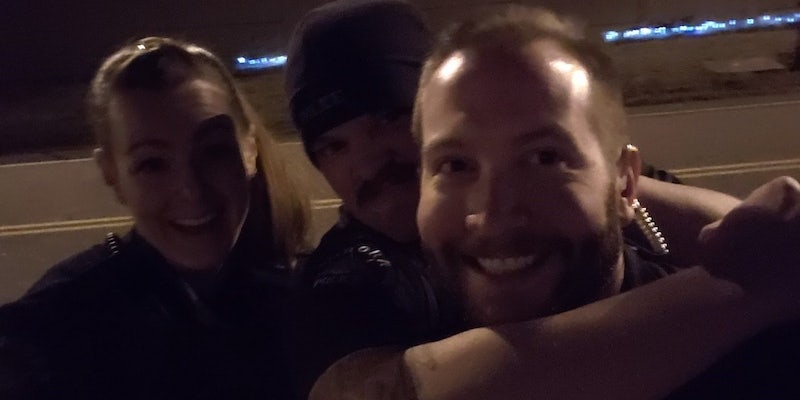 Another officer—who was involved in McClain's death—was also fired for laughing at the photos.

Three Aurora, Colo., police officers have been fired over photographs taken at the death site and memorial to Elijah McClain. A fourth officer—who was in the photo—resigned.

McClain, 23, died last August after an arrest in which he was tackled by three police officers, held in a chokehold, and finally injected with ketamine. District Attorney Dave Young declined to prosecute the officers involved, stating that he couldn’t “prove one way or the other” that their conduct had led to McClain’s death. Instead, they were reassigned to “nonenforcement duties” last month “for their own safety” after the George Floyd protests brought about renewed interest in McClain’s case.

The site of McClain’s death has been converted into a memorial by members of the public. Recently, photographs emerged featuring three police officers, Kyle Dittrich, Erica Marrero, and Jaron Jones, posing in front of it, smiling and imitating a chokehold like the one McClain was subjected to during his fatal arrest. The photos, which were taken in October, were then sent on to officer Jason Rosenblatt, who was involved in McClain’s arrest.

The officers responsible for the photograph have allegedly claimed they took it to “cheer up a friend.” Dittrich and Marrero, along with Rosenblatt, who responded to the photograph with a text message saying “haha,” have been fired for “conduct unbecoming to an officer,” while Jones resigned.

The Aurora Police Association has objected to the speed with which action was taken against the officers, stating that an Internal Affairs investigation normally takes months. However, several police departments have taken similarly quick action against incidents of police misconduct since the George Floyd protests began.

Relevant for many is the fact that Rosenblatt was finally disciplined not for any part he may have played in McClain’s death but for making fun of it in the aftermath.

“That is the culture that we’re fighting, where a police officer can murder a black man, a black child, and keep his job and stay on the force so he can go make fun of this child.”

While the McClain family’s lawyer said that the photographs resembled those taken after lynchings. A sentiment echoed by many internet commenters.