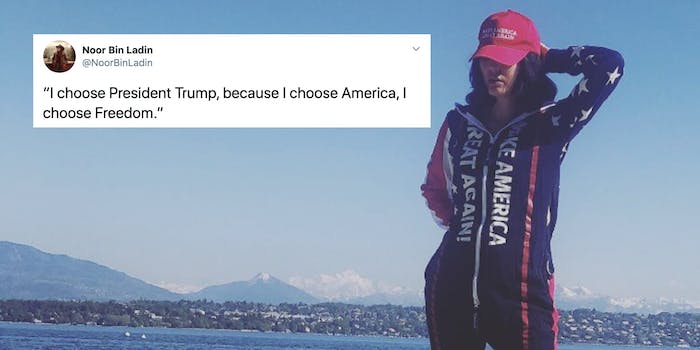 'I have been a supporter of President Trump since he announced he was running...'

The niece of deceased al-Qaeda leader Osama bin Laden is apparently a big fan of President Donald Trump and the QAnon conspiracy theory.

Speaking with the New York Post in her first-ever interview, 33-year-old Noor bin Ladin revealed that she has supported the president for the past several years.

“I have been a supporter of President Trump since he announced he was running in the early days in 2015. I have watched from afar and I admire this man’s resolve,” bin Ladin said. “He must be reelected… It’s vital for the future of not only America, but western civilization as a whole.”

Despite being born and raised in Switzerland, the young bin Ladin considers herself an “American at heart” and has even claimed that a Joe Biden presidency would potentially lead to another 9/11-style attack.

“ISIS proliferated under the Obama/Biden administration, leading to them coming to Europe,” bin Ladin said. “Trump has shown he protects America and us by extension from foreign threats by obliterating terrorists at the root and before they get a chance to strike.”

Bin Ladin’s views are on full display on her Twitter profile, where she regularly shares tweets from the president and other popular conservative pundits.

Aside from her tweets on everything from the “deep state” to the perils of voter fraud, bin Ladin is also a supporter of the QAnon conspiracy.

In one tweet, bin Ladin uses numerous QAnon-related hashtags alongside a picture of her adorned in Trump merchandise. The conspiracy paints Trump as a heroic figure working to take down a cult of Democratic baby-eating pedophiles.

Since the 9/11 attacks, bin Ladin says she has visited the U.S. multiple times and hopes to visit the memorial for the terror attack in New York one day.

“I have not had a single bad experience with Americans despite the name that I carry,” bin Ladin said of her visits. “On the contrary, I was overwhelmed by their kindness and understanding.”

Despite her deep admiration for the president, it seems unlikely that the Trump campaign will be highlighting bin Ladin’s endorsement anytime soon.