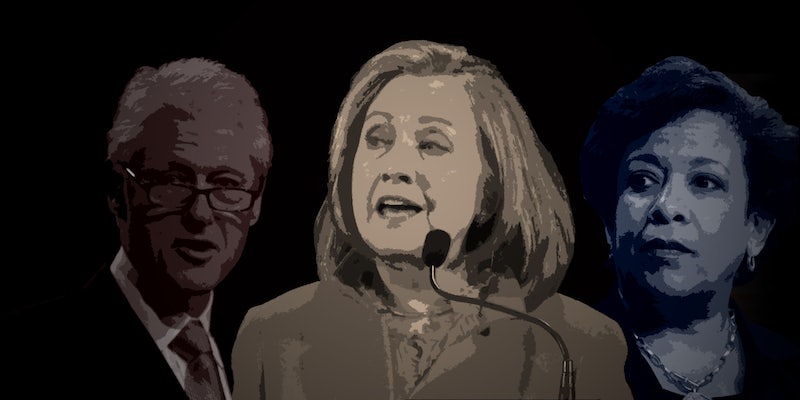 Like a scene plucked straight from 'House of Cards.'

The impromptu meeting was first reported by local Phoenix affiliate ABC15 after a tip from anonymous sources, occurring while Lynch’s Justice Department continues its investigation into presumptive Democratic nominee Hillary Clinton‘s use of private email during her tenure as secretary of state.

Also on Tuesday, House Republicans released their long-awaited report on the deadly Sept. 11, 2012, attacks on a U.S. consulate in Benghazi, Libya, which took place during Clinton’s time at the State Department and remains a point of partisan criticism of the Democratic candidate.

The meeting has sparked further controversy for a presidential candidate whom critics see as the embodiment of Washington’s veiled political machine and whom many voters view as untrustworthy.

Neither the Donald Trump nor Clinton campaigns immediately responded to our requests for comment about the meeting.

In a press conference following the meeting, Lynch dismissed any notion that her conversation with Clinton, which reportedly lasted roughly 30 minutes, contained any inappropriate discussions of the ongoing email investigation.

“I did see President Clinton at the Phoenix airport as he was leaving and [he] spoke to myself and my husband on the plane,” Lynch said. “Our conversation was a great deal about grandchildren, it was primarily social about our travels and he mentioned golf he played in Phoenix.”

While Lynch’s discussion with President Clinton has gained steam among the right-wing press and online communities that support presumptive GOP nominee Trump, members of Congress from both sides of the aisle have criticized the meeting but shrugged off any notion that Lynch will not be objective in her role as attorney general.

“I think she should have said, ‘Look, I recognize you have a long record of leadership on fighting crime but this is not the time for us to have that conversation. After the election is over, I’d welcome your advice,’” Sen. Chris Coons (D-Del.) told CNN.

Rep. Peter King (R-N.Y.), speaking with MSNBC about the meeting, said President Clinton “obviously … shouldn’t have done it.” King added, “I’ve had a lot of respect for Loretta Lynch when she was here in New York. I’ve been somewhat disappointed by some of the things she’s done as attorney general.”

While a certain segment of Americans have long distrusted the Clintons, who are sometimes seen as overly private, President Clinton’s private conversations with other political players have repeatedly raised eyebrows during the course of the 2016 election.

Last August, the Washington Post revealed that Clinton spoke with Trump weeks before the Republican candidate launched his presidential bid, inciting speculation that Trump’s bizarre campaign is part of a Clinton plot. Clinton dismissed that notion in October during an appearance on Stephen Colbert‘s The Late Show.

The FBI investigation into Secretary Clinton’s email use is expected to conclude soon. It remains ongoing, putting the investigation within three weeks of the Democratic National Convention in Philadelphia, which begins on July 25. If Clinton were to be indicted, it would not automatically disqualify her candidacy but would add pressure for her to end her campaign.

Clinton’s challenger, Sen. Bernie Sanders (I-Vt.), has vowed to remain in the race through the convention.

On Wednesday, famed data journalist and editor-in-chief of FiveThirtyEight Nate Silver gave Clinton a 79 percent chance of beating Trump in the general election.

Correction: The meeting between Clinton and Lynch took place aboard her plane.