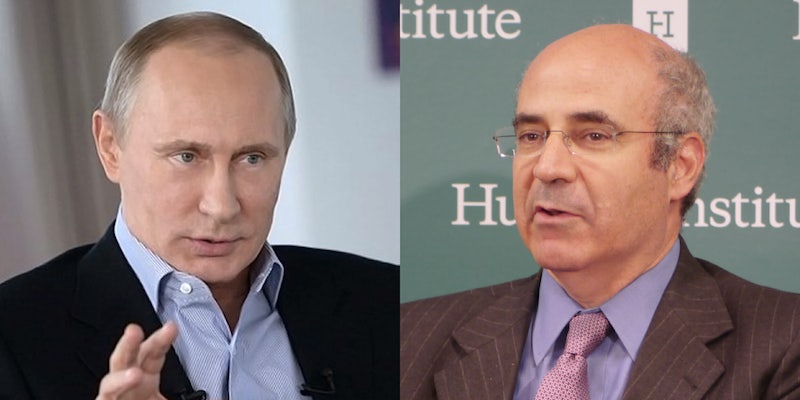 The July 16 press conference between President Trump and Russian leader Vladimir Putin is sending shockwaves through the political world, with a number of prominent figures in both the Democratic and Republican parties openly accusing the president of treason.

During the press conference, Putin was asked by an American reporter why the American people should believe Putin’s protestations that Russia didn’t interfere in the 2016 election, given the evidence compiled by U.S. intelligence agencies.

After allowing Trump to claim once again that there was no collusion between his campaign and Russia, Putin seemingly offered his assistance with helping Robert Mueller wrap up his investigation by making indicted Russians available for law enforcement interviews.

Of course, there would be a catch. Putin brought up “illegal actions on the territory of Russia” carried out by American business and law enforcement officials, and speculated that he’d like some help from the Trump administration in investigating these.

Putin singled out a longtime nemesis, American-born British expatriate Bill Browder, as an example of this wrongdoing, and in the process, made a bombshell claim that right-wing conspiracy theorists immediately jumped all over as proof of massive amounts of dirty money flowing to Hillary Clinton’s 2016 campaign.

Who is Bill Browder?

“For instance, we can bring up Mr. Browder in this particular case,” Putin began. “Business associates of Mr. Browder have earned over $1.5 billion in Russia. They never paid any taxes. Neither in Russia nor in the United States. Yet, the money escapes the country. They were transferred to the United States. They sent huge amount of money, $400 million as a contribution to the campaign of Hillary Clinton.”

“We have solid reason to believe that some intelligence officers guided these transactions,” Putin concluded. “So we have an interest of questioning them.”

Almost as soon as Putin made the claim, the familiar coalition of far-right infotainment pundits and conspiracy theory sites began repeating it without the slightest investigation as to its veracity.

Another “news” site, the frequently incorrect Gateway Pundit went a step further, declaring that Putin had “blown apart” the Special Counsel’s collusion probe with his claim. Neither re-telling of the comment offered anything in the way of investigation as to what it meant or whether it was true only that it was bad for Mueller, and good for Trump.

Prominent conservatives on Twitter also ran wild with the claim, seeing it as the ultimate “gotcha” moment against Hillary Clinton.

Is Hillary Clinton and the @DNC going to give Putin back the $400 Million tax free illegal contributions that she received during the 2016 Elections from Russia? #BillBrowder #Helsinki #Treason

Finally, believers in the #QAnon conspiracy theory declared that the “$400 million donation” claim was the massive “truth event” that the supposed insider predicted earlier this year—and also serves as proof that both Trump and Putin ultimately have the best interests of America in mind.

To understand why Putin would make a claim like this, it’s important to know who Bill Browder is, and why he and Putin detest each other.

What we know about Bill Browder

Browder is a hedge fund investor and financier, who once had the largest holdings in Russian capital of any foreigner. To avoid paying taxes on his portfolio, Browder renounced his American citizenship and moved to London.

In 2005, Browder was abruptly blacklisted by the Russian government as a result of his attempts to expose endemic corruption in the country’s financial oversight system, which is heavily intertwined with its government.

After that, Browder became an outspoken opponent of Putin. When an employee of Browder’s hedge fund was arrested and died in prison after a year of improper medical treatment, Browder led the charge for sanctions to be put on Russia.

My thoughts on the huge error of Trump meeting with Putin as effective 'equals' in Helsinki. Putin is a guy who should be contained, not engaged. https://t.co/iQCQ5olDVA

Those sanctions became known as the Magnitsky Act, named after the deceased employee, and barred high-level Russian officials from entering or doing business with the United States—likely costing Putin and oligarchs connected to him enormous amounts of money.

It was that law which prompted Putin to reverse his policy on American families adopting Russian children. Eventually, it also wound up serving as the pretext for the infamous July 2016 Trump Tower meeting involving Donald Trump Jr., Jared Kushner, and Paul Manafort—though none of the participants in the meeting seemed to know it at the time.

Putin slimes Bill Browder, author of Magnitsky Act, further confirming that the infamous June meeting at Trump Tower was to advance treasonous deal of lifting Magnitsky sanctions on oligarchs in exchange for dirt on Hillary and ending the ban on US adoption of Russian babies.

Browder and Putin have continued their feud in public by attacking each other in interviews, tweets, and a book by Browder that essentially accuses Putin of murder. In turn, Putin has lobbied Interpol to arrest Browder on several occasions, and the financier was tried and convicted by a Russian court in absentia of tax evasion.

But if it’s clear why Putin would want American help in tracking down Bill Browder, it’s not at all clear if this particular accusation is supported by evidence.

Browder immediately denied making any major donation to Clinton, and would have been prohibited by law of giving Clinton anything at all, given that he’s no longer an American citizen.

Such a sizable donation would be impossible to hide from the American media, but no single donation of that size was ever reported by any news outlet to the Clinton campaign—by anyone.

We tried to fact-check PUTIN's claim that @BillBrowder's associates donated $400M in un-taxed Russian $ to @HillaryClinton's campaign, but it was so completely without evidence that there were no pants to light on fire, so I hereby deem it "WITHOUT PANTS." https://t.co/js3XprGK1T

So where did the claim come from?

It’s not clear, but what Putin said was possibly a variation on the “dirt” that ed to the Trump Tower meeting in the first place— explosive information that the Clinton campaign was reaping vast amounts of illegal contributions by foreign parties.

As we now know, this information quickly fizzled, and the Trump officials in the meeting were confronted not with a goldmine of dirt, but multiple requests that Donald Trump overturn the Magnitsky Act, cancel the sanctions, and let the money flow freely toward the oligarchs on the U.S. blacklist. Incidentally, Trump did become president, and none of this happened.

If Bill Browder or any other foreign citizen had made a massive and hugely illegal gift to the Clinton campaign, and the Trump inner circle knew it, it would have been used against her immediately.

Whatever conspiracy Putin was peddling in this press conference was already old news, and it’s likely that Putin made the claim simply to give the American right-wing conspiracy machine something to churn.

Which is exactly what happened.