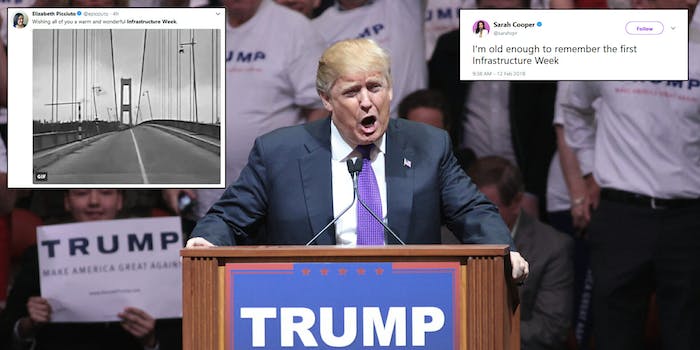 And a happy infrastructure week to you.

President Donald Trump has declared a “big week” for infrastructure–and if this one is anything like the last one, things are gonna be wild.

Trump’s last infrastructure week was June 2017, but the idea of having a whole week focusing on infrastructure was quickly forgotten after former FBI Director James Comey gave testimony to Congress regarding his ouster by the president, Trump tweeted about London’s mayor shortly after a terrorist attack, and the president went on a tweetstorm where he blamed the Justice Department for a “watered down” version of his Muslim ban.

This time around the president appeared to continue that trend by muddying the focus and jamming the “Middle East” into his Monday morning tweet announcing the newest iteration of infrastructure week.

This will be a big week for Infrastructure. After so stupidly spending $7 trillion in the Middle East, it is now time to start investing in OUR Country!

This time, however, Trump’s administration is expected to tout its $1.5 trillion plan to update infrastructure in the country.

The plan reportedly will rely on state and private investment and will only include $200 billion in new federal funds. The plan could face some resistance in Congress.

I hope y'all got enough rest over the weekend, because it's Infrastructure Week again pic.twitter.com/vfdEmurVh1

Can’t believe I let Infrastructure Week just sneak up on me again.