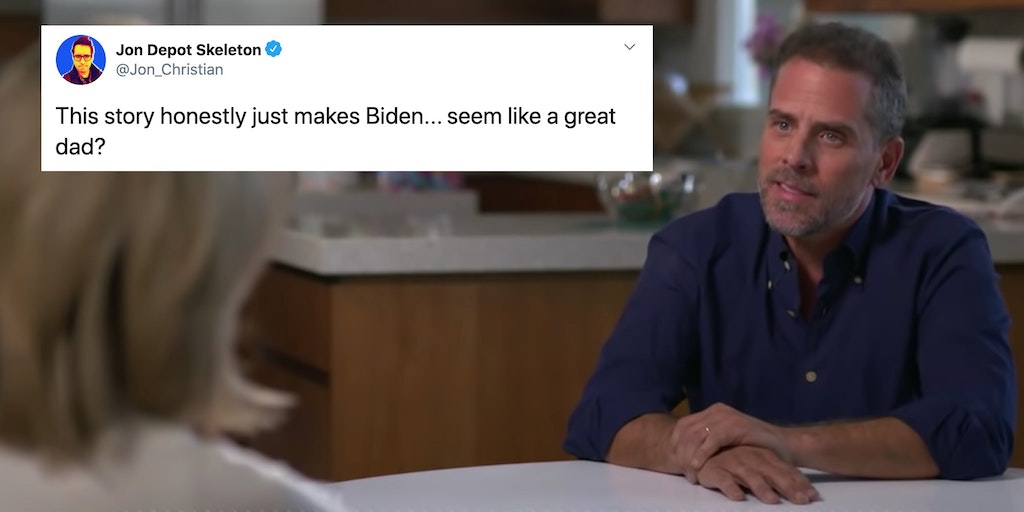 The New York Post on Friday published alleged text messages between Joe Biden and his son Hunter detailing the family’s personal struggles—but instead of damaging the Democratic nominee’s chances of becoming president, the texts are receiving praise online.

The messages, allegedly found on a water-damaged laptop purported to belong to Hunter, allegedly show the former vice president comforting his son.

“Good morning my beautiful son,” Biden wrote. “I miss you and love you. Dad.”

Hunter is alleged to have responded by complaining about his ex-wife and other issues before referring to himself as a failure.

“Well dad, the truth is as you and hallie point out — I am a f*cked up addict that cant be…Trusted relied upon nor defended,” Hunter allegedly wrote.

Biden went on to praise his son for raising three daughters before offering other words of encouragement.

While it’s unclear what exactly the Post was hoping to achieve by publishing the alleged texts, much of the response online was supportive.

Others agreed as well, arguing that the alleged texts were able to humanize Biden in a way not previously seen.

“The Republicans are such ghouls that they picked out Biden’s only positive trait as a human, and made that their method of attack,” @FurMelodyYoung said.

The Post’s article is the latest in a series based on alleged data supposedly discovered on a laptop by a computer repairman in Delaware.

The repairman claims to have alerted the FBI to the computer before making a copy of the hard drive and handing it over to the lawyer of former Mayor Rudy Giuliani.

The Post was allegedly alerted to the laptop’s existence by Steve Bannon before receiving the data from Giuliani.

Experts have questioned the alleged origins of the data given numerous inconsistencies and changes in the story.

Federal authorities have since opened an investigation into whether the data was actually leaked as part of a foreign intelligence operation.