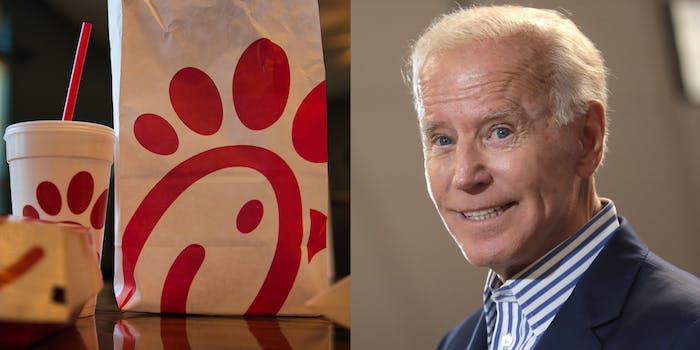 ‘This is the hardest I’ve laughed in a while’: Republicans blame Biden for a Chick-fil-A sauce shortage

Republican's latest attacks against Biden are about... a sauce shortage.

Republicans were never going to be happy with any decisions made by President Joe Biden, so partisan attacks are to be expected. But now the volleys are getting a bit strange, with at least three Republicans laying the blame of a Chick-fil-A sauce shortage on the president.

Chick-fil-A announced last week that it was limiting the amount of sauce it could give out to customers, citing industry-wide supply chain issues. As a result, the chain said it would only give customers one cup of sauce per item.

The sauce shortage is clearly an attack on democracy and everything we hold dear, or so Republicans seem to think.

Cruz went so far to say that shortage showed that Biden was “destroying America.”

Meanwhile, Boebert’s response to a fast food chain having a sauce shortage was asking an open question: “Is there no limit to how awful Biden’s America can get?”

But apparently just complaining about a shortage of zesty buffalo sauce, honey mustard, barbeque sauce, and garden herb ranch wasn’t enough. Oklahoma’s governor decided to try and fundraise off of it.

“Gas stations are having mass shortages, gas prices are soaring, the cost of groceries is through the roof, and now Chick-fil-a has a sauce shortage. And who is paying the price? Everyday Americans,” the email read, according to the news outlet.

When asked about the email, Stitt told TulsaWorld that he hadn’t seen it.

The various Republicans having a meltdown over the sauce shortage became the butt of numerous jokes online.

There’s no telling what sauces Biden will target next. Time to stock up.