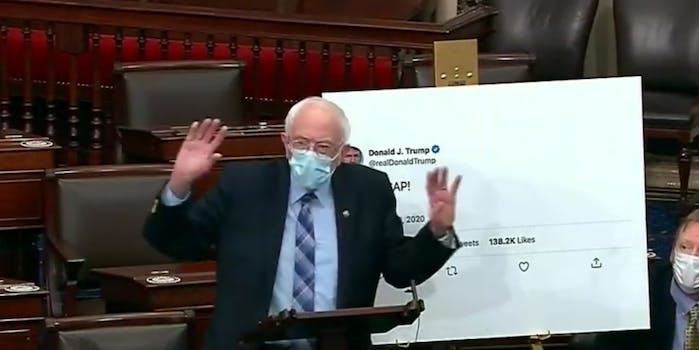 The unlikely prop became an instant canvas for all sorts of seasonal messages.

Sen. Bernie Sanders (I-Vt.) used a tweet from President Donald Trump about raising the coronavirus relief checks from $600 to $2,000 during a speech on the Senate floor on Wednesday, sparking a slew of memes that used Sanders’ prop as a template.

Sanders was trying to force a vote on raising the checks, which Senate Majority Leader Mitch McConnell (R-Ky.) has blocked without the attachment of two provisions he has pushed, likely as a way to doom any vote on increasing the checks.

On Tuesday, McConnell introduced a bill that would link raising the coronavirus relief checks to fully repealing Section 230 of the Communications Decency Act and creating a commission to investigative supposed voter fraud. Those attachments make it unlikely to receive Democratic support.

During his speech, Sanders used a prop of Trump’s tweet from earlier in the day where the president said “$2,000 ASAP!”

“Working families deserve help, and they deserve a $2,000 check. As Sen. Schumer just indicated, we have a very unlikely ally in President Trump.” Sanders said in his speech. “Nobody here would disagree with Trump more times than I have. And yet here is what the leader of the Republican party says: He says ‘$2,000 ASAP!’ So even on this issue, amazingly enough, the president of the United States is right.”

Sanders continued: “All that we are asking for is a vote. What is the problem?”

Sanders was joined by Sen. Ed Markey (D-Mass.) in asking for a vote on a House bill that would increase the coronavirus checks, only to be blocked by Republicans.

But Sanders’ use of the blown-up Trump tweet as a prop quickly became a template for a meme, with people using the canvas to insert a number of jokes.