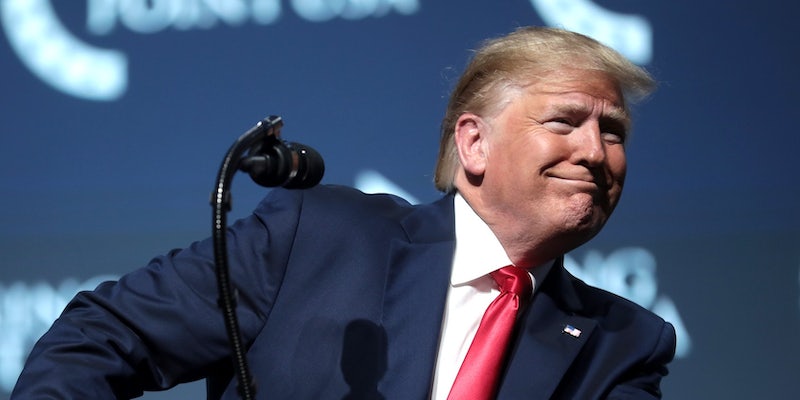 Presidents have long inspired art both mocking and worshipping them. In the former camp, who could forget President Donald Trump photoshopped so that his eye is Homer Simpson’s mouth?

In some cases, a particular piece of art may be taken both ways, like that one of Trump’s head on the body of Sylvester Stallone as Rocky Balboa. A painting recently posted by the Arizona Republican Party’s verified Twitter account is the latest installment of this particular genre.

The painting, 1776 by Lyudmila Tomova, puts the nation’s 45th president in a Revolutionary War uniform. An eagle flies menacingly behind him, and Trump’s hands are on a musket and a modern-day American flag. The White House, which was built a decade after the war ended, looms in the background.

On her website, Tomova, an avid Trump supporter, describes the painting as “dedicated to the patriot resistance fighting for our liberty and the republic.” Tomova, whose recent work also includes a discomfiting portrait of her “hero” Sidney Powell, told a far-right website that she modeled the painting of Trump after George Washington.

Twitter users were more taken with how utterly ridiculous the painting is. To them, it’s a symbol of how unhinged some Republicans have become in the Trump era.

“Drugs are a hell of a drug,” commented Molly Jong-Fast.

The painting is particularly ironic because Trump reportedly called America’s wounded and dead veterans “losers” and “suckers,” a charge he denies.

He’s also a notorious draft dodger whose doctor got him out of serving in the Vietnam War by claiming he had bone spurs.

Naturally, the classic video of an eagle attacking Trump surfaced in the comments.

Many pointed out its similarity to another famous—well, infamous—figure of Revolutionary War history: Benedict Arnold. Arnold is widely considered the most notorious traitor to the United States.

The painting is listed at $5,000 on Tomova’s website. If that’s out of your budget, you can also buy it on t-shirts, handbags, pillows, and, of course, facemasks.