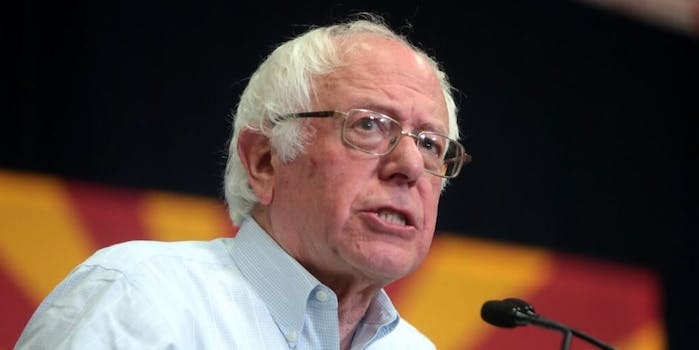 Is Bernie Sanders a Russian asset? Just look at the dang time zones

Everyone is a Russian asset these days.

Russia’s election interference in 2016 launched a trend of accusing politicians of being foreign assets.

Sen. Bernie Sanders (I-Vt.) is now among those who’ve been accused of such thanks to a viral tweet. Others include President Donald Trump, Sen. Mitch McConnell (R-Ky.), Sen. Lindsay Graham (R-S.C.), and Rep. Tulsi Gabbard (D-Hawaii).

The accusation that Sanders is in Russia’s pocket—which he has vehemently and repeatedly denied—has been around for a while. Early this morning, before most were awake, “President Sanders” started trending on Twitter. This served as an opening for some to revive the rumor.

Novelist Greg Olear, who is extremely vocal in his accusations that Sanders is compromised by the Russians, called the senator a “useful idiot for [Russian President Vladimir] Putin,” and “the Trump of the left.” In a subsequent tweet, Olear added, “[W]hen I woke up at 5:45 AM New York time, ‘#PresidentSanders‘ was trending on Twitter. Why do you think that is? (Hint: Moscow is eight hours ahead.)”

In the article linked in Olear’s first tweet, he repeats several of the facts the rumor is based on: Sanders is a socialist, he missed one vote on Russia sanctions and voted against another sanctions bill, he honeymooned in Russia, and, most notably, the Mueller report found that Russia attempted to help his 2016 presidential campaign. Of the latter, Olear opines, “Either Bernie didn’t realize this, and is an idiot, or he did realize it and played along, and is a traitor.”

Later on, Olear noted what is well known, that Russiam bots tend to amplify lots of things on Twitter.

Sanders has said that he voted against Russian sanctions because it included sanctions against Iran that violated the Iran nuclear agreement. And when the news broke about Russia attempting to aid his campaign, Sanders tweeted support for the Mueller investigation.

It is absolutely imperative that the Mueller investigation be allowed to go forward without obstruction from the Trump administration or Congress.

A 2015 Magnitsky Act that strengthened the sanctions passed the Senate by unanimous consent. On his campaign website, Sanders writes that he supported the subsequent act.

Some pushing the Sanders-Russia connection brought up the long-debunked conspiracy theory that Seth Rich, the murdered Democratic National Committee staffer, was WikiLeaks’ source of DNC emails in 2016, which they believe he did to exact revenge for Sanders’ campaign being kneecapped by the DNC.

The media also refuses to vet Bernie Sanders, a co-conspirator paid by Russia to help get Trump elected. #ElectoralFraud pic.twitter.com/s6ukRQf6hB

These men were murdering, brutal dictators & he covered for thempic.twitter.com/GddLJAxY1z

Responses to the rumor were largely skeptical and mocking. Few, it seems, are willing to buy the notion that Sanders is Putin’s patsy.

“Russian intelligence is clever enough to rig an entire election in 2016, but apparently not smart enough to schedule their tweets to correspond to US time zones. You’re really knocking it out the park here bud,” wrote one. “Wait, things are still trending overnight when very few people are tweeting? Must be Russia!” another tweeted.

Sanders voted no on Russian sanctions because they were attached to cruel and unprovoked sanctions on Iran. I swear mainstream dems couldn't care less about all the evil the US perpetrates in the middle east.

Interestingly, the argument over Sanders’ alleged Russian alliance makes uneasy bedfellows of QAnon followers and liberals. It also pits liberals against one another, not unlike the Hillary Clinton versus Sanders supporters’ arguments in 2016.

Which is probably exactly what Trump and Putin like to see.