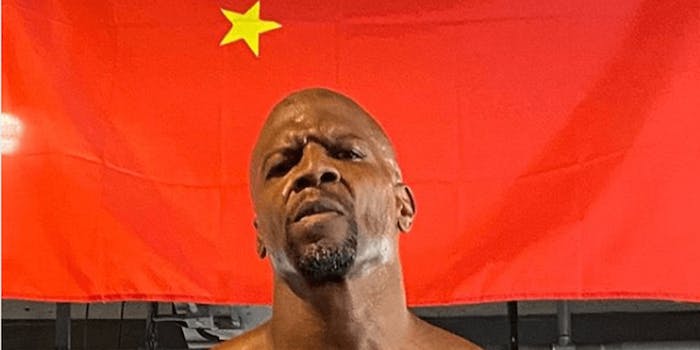 Terry Crews is taking heat for his pro-China Instagram

Actor Terry Crews put up a curious post on his Instagram showing him looking menacing and hulked-out, in front of China’s national flag, with the message: “POWER TO THE PEOPLES 🇨🇳#china #shanghai #workout #workoutmotivation #peoplesrepublicofchina.”

The Brooklyn Nine-Nine star appears to be selling something because he put @mutantnation into his Twitter post. Mutant is a workout supplement and gear company based out of Vancouver.

Going on the previous post, he’s been in Shanghai, for either business or pleasure, and seems to be enjoying his time.

Crews family enjoying the holiday in SHANGHAI! This place is INCREDIBLE!!! Truly a wonder to see in person! WORLDWIDE LOVE @ 陆家嘴中心绿地 https://t.co/gca2vw6CGh

Other than this, it’s difficult to understand who or what “peoples” he’s supporting, which would be an essential point of emphasis given China is currently combating allegations that it has locked up scores of Uighur Muslims in gulags.

China claims the concentration camps, per Reuters, are vocational training centers that aim at fighting terrorism and religious extremism, presumably by Uighur Muslims. Per a United Nations Human Rights Council hearing, groups are looking to confirm the pervasive allegations of organ harvesting by the thousands, and that the camps have built-out incinerators to destroy remains of the bodies.

However, he’s receiving high heat for the posts, with many given him the name “comrade.”

I say this without hyperbole- it’s like standing under a Nazi flag. I do not say this lightly. Genocide, Terry. Genocide.

Dude have you been hacked? Are you being paid? It's a totalitarian regime with concentration camps

The entire thing could be completely innocuous. Because Crews has yet to comment on his messaging, it’s difficult to ascertain any meaning. However, it sounds clear that his fans aren’t aligned in what they mostly perceive is support for a dictatorship doing monstrous things.

You REALLY picked the wrong time to be working on a project in China bro!
I think most of what you are getting is an overreaction, and I actually feel sorry you'll have to experience it, but at the same time everyone should be examining their business relations with China now.