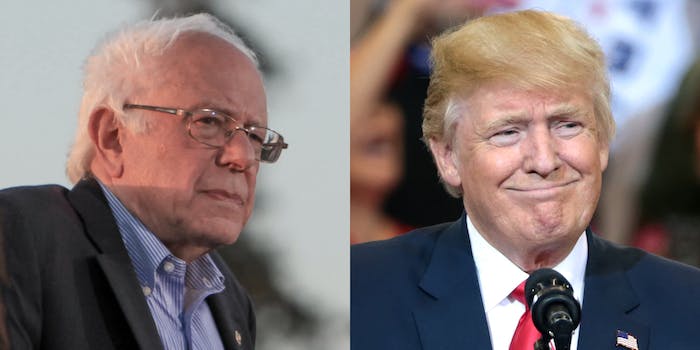 Republicans as Sanders rises: Watch out, we may vote for Trump

They promise they'll vote Democrat... unless.

Over the weekend, Sen. Bernie Sanders (I-Vt.) cemented his front-runner status in the Democratic primary with a resounding victory in the Nevada Caucuses.

With him gaining steam in polls in South Carolina, and his support among Latinos giving him a possible edge on Super Tuesday, it’s very possible Sanders will be the Democratic nominee for president in 2020.

And Republicans want you to know: They won’t vote for him.

But a swath of Republicans wants you to believe that—despite providing no real evidence to prove this—they would vote for a hypothetical Democrat over Trump.

Just so long as it isn’t Sanders.

On Saturday, as the results started rolling in, Republican strategist Liz Mair—who previously went viral for some casual racism—said that if it was a race between Sanders and Trump, she’d (with a performative sigh) vote Trump.

“Guys, I’m just going to say this now. 1) I am not representative of many voters but 2) if it’s a Trump v Bernie contest and CT is within 5 points (unlikely but whatever) I will vote for Trump. They’re both awful. They both love the British NHS which is automatically disqualifying,” she wrote.

Mair worked for both Scott Walker and Ted Cruz, prominent Republicans, so as odious as she might publicly say she finds Trump, the idea she’d pull the lever for Joe Biden or Amy Klobuchar seems unlikely.

But Republicans, in the era of Trump, want you to know that they get Trump is bad, and if Democrats could just make it a little easier on them, maybe they’d switch parties this time.

David French, editor at the right-leaning site the Dispatch, wants you to know that Sanders is not a “fit candidate” and that voting for him would be endorsing the Democratic party’s failure.

Erick Erickson perhaps summed it up best by saying that Sanders’ progressive agenda would stop him and his Never Trump friends from voting for Sanders.

“It is remarkable that the Democrats are going to hand their nomination to a man who will cause a lot of my Never Trump friends who are still opposed to Trump to suddenly hold their noses and vote Trump,” he wrote.

Although there was a concerted (ish) Never Trump movement in 2016, just about every major Republican figure has essentially fallen in line with Trump.

And although these figureheads of supposedly reasonable Republicans will tell you they are leaning in a direction of not voting Trump, their tweets raise more questions than answers.

There’s no proof that they’d vote for Sen. Elizabeth Warren (D-Mass.) over Trump, or even Pete Buttigieg over Trump. They’re Republicans.

What they’re concerned about is Sanders actually winning the primary and gaining steam, and they’re trying to combat that by pretending that some unnamed moderate would get some large swatch of voters, over Trump, who they would totally not vote for, just as long as some wonderful centrist was in the race.

But if that were true, and these people did really feel this way, well, Hillary Clinton would be president.

And if they didn’t pull the lever for her, they aren’t gonna for Biden.