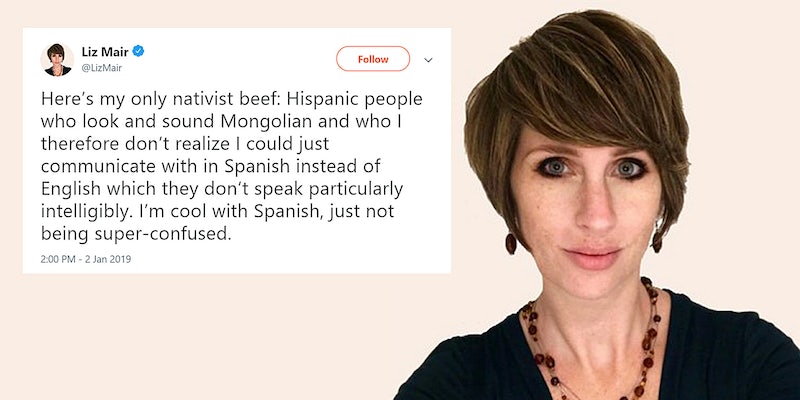 It is indeed specific.

On LinkedIn, she describes herself as an anti-Trump Republican. But the Republican Party under President Donald Trump has become a place where it’s OK to air nationalist, racist views as it increasingly sees a hardline on immigration as its only core identity.

So where does Mair stand at that intersection? Well, against it, except for just one issue.

“Here’s my only nativist beef,” Mair wrote, as though having just one was OK. “Hispanic people who look and sound Mongolian and who I therefore don’t realize I could just communicate with in Spanish instead of English which they don’t speak particularly intelligibly. I’m cool with Spanish, just not being super-confused.”

And no one knows why she posted this.

What a coincidence. I'm concerned about people who look and sound like racist dipshits. Glad I found your tweet.

Nothing like a little racism from a republican Comms director. https://t.co/iF4Y1InPHX

Update 7:33am CT, Jan. 3: Mair did not originally respond to a request sent to an old email. However, on Twittter, she announced she was deleting her tweet, which she said was sarcasm that had been misconstrued and explained in a thread.

In an email to the Daily Dot, Mair said that given her background on immigration policy, it should have been clear it was a sarcastic statement.

“I’m honestly really surprised given my very public and well-known reputation for ongoing, daily work on pro-immigration and pro-immigrant causes … But I guess it’s a good intermittent reminder that sarcasm really doesn’t translate on Twitter … Plus I’ve got the wrong partisan affiliation and Trump being President does lead a lot of people to assume a lot of erroneous things about Republicans on spec.