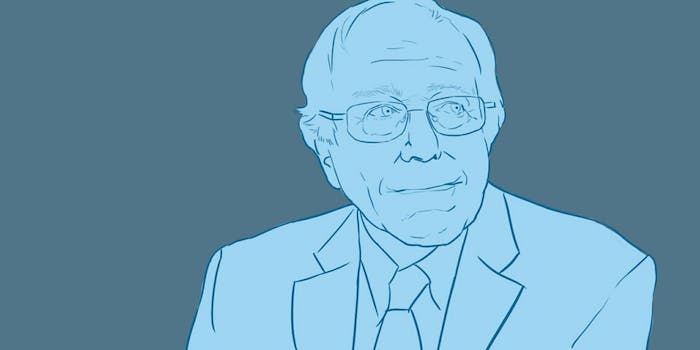 Pope Francis 'is asking us to create a new form of society,' Sanders says.

As Pope Francis‘ visit captures the attention of America, Sen. Bernie Sanders (I-Vt.) aligned the Catholic leader’s vision for the world with his own 2016 presidential platform in a post on Facebook.

Francis is visiting the White House today as thousands of spectators lined the streets outside 1600 Pennsylvania Avenue in order to catch a glimpse of one of the most popular men on Earth.

Even so, Francis faces challenges during his U.S. visit. The Pope rates more favorably among Americans than anyone in government, but a new Bloomberg poll says most Americans disagree with the Holy Father’s decision to chastise those who deny a human connection to climate change.

“Climate change is a problem that can no longer be left to a future generation,” Francis said during his address at the White House.

Human-caused climate change continues to be a divisive issue in the U.S., with a quarter of the country remaining solidly skeptical, according to Gallup, despite a wide-reaching scientific consensus.

Francis has a number of signature issues, however, and most rate highly with Americans.

Francis’s suggestion that the Catholic church do more to harness the energy and compassion of women, his authorization of priests to forgive women who had abortions, and his refusal to condemn gay people to Hell are among his most well-supported moves in the U.S.

Even Francis’s urging that nations be more accepting of immigrants finds 70 percent support in America, despite the issue currently being a lightning rod across the Western world.

In addition to climate change, wealth inequality ranks highly among the issues on which Sanders and Francis seem to agree.

The need to shrink the gap between rich and poor—or even the rich and middle-class Americans—remains a centerpiece of the Sanders campaign. Known as the “slum pope,” Francis, meanwhile, has consistently condemned the “idolatry of money” and has focused much of his ministry on helping the poor.