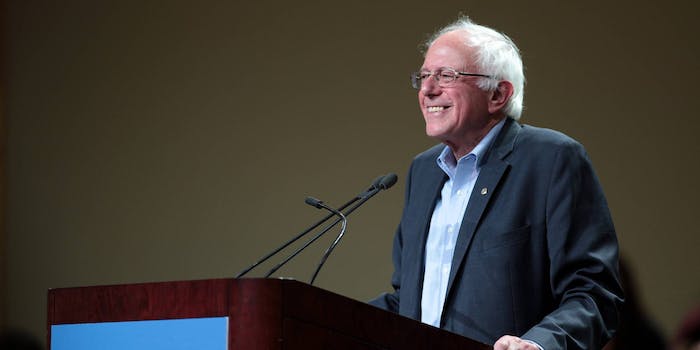 The Bern has never felt so good.

This election is also historic in that most people don’t like either of them.

According to an average of national opinion polls calculated by Real Clear Politics, Clinton’s net favorability rating is -13 points, whereas Trump is at -18 points.

If there’s one truism about Americans, it’s that they have a tendency to want what they can’t have. As the Washington Post points out, a number of recent polls suggest that Vermont Sen. Bernie Sanders may be the most popular national politician in America.

In a Fox News poll, the self-described democratic socialist, who mounted a strong challenge to Clinton for the Democratic nomination, had a +24 favorability rating. A NBC News/Wall Street Journal poll conducted by Hart Research Associated showed Sanders at +22, and a CNN/ORC International survey showed him at +24.

The spread between favorable and and unfavorable for Sanders is about three times larger than that of President Barack Obama, who is in the midst of a surge in popularity as his second term in the White House comes to a close.

Despite Sanders’ popularity, it wasn’t enough to overcome Clinton with Democratic primary voters. Clinton’s spread over Sanders, who spent the majority of his congressional career as an independent and only joined the Democratic Party in anticipation of his presidential run last year, was over 3.7 million votes.

The direct comparison between Sanders and the general election candidates aren’t entirely fair. The Clinton campaign largely refrained from aggressively attacking Sanders directly, although surrogates like the super PAC Correct The Record did lob their fair share of highly-coordinated attacks. Throughout much of the primary race, Sanders polled better in a hypothetical match-up against Trump; however, Republican insiders consistently viewed Sanders as a more beatable opponent than Clinton.

“Republicans are being nice to Bernie Sanders because we like the thought of running against a socialist. But if he were to win the nomination the knives would come out for Bernie pretty quick,” Ryan Williams, who served as a spokesperson or the presidential of 2012 GOP presidential nominee Mitt Romney, told Bloomberg. “There’s no mystery what the attack on him would be. Bernie Sanders is literally a card carrying socialist who honeymooned in the Soviet Union. There’d be hundreds of millions of dollars in Republican ads showing hammers and sickles and Soviet Union flags in front of Bernie Sanders.”

The comparison is also likely affected by Sanders no longer being in the race. For Clinton partisans, Sanders’s effort to beat their preferred candidate, along with his refusal to exit the race for weeks after he had been all but mathematically eliminated, certainly bred antipathy. However, following Sanders’s full-throated endorsement of Clinton at the Democratic National Convention and subsequent warnings to his fans about the dangers of voting for a third-party candidate, much of that hostility seems to have subsided.

Looking to capitalize on the widespread positive feelings toward Sanders, the Clinton campaign released a video on Monday highlighting how former rivals are working together to prevent a Trump presidency.

Sanders has parleyed the newfound notoriety that has come with his presidential campaign into an effort called Our Revolution that aims to harness the progressive energy that bolstered his campaign into a long-term political force. The group faced some early stumbles; however, it has focused its energies toward stopping the ratification of the controversial Trans-Pacific Partnership trade deal.