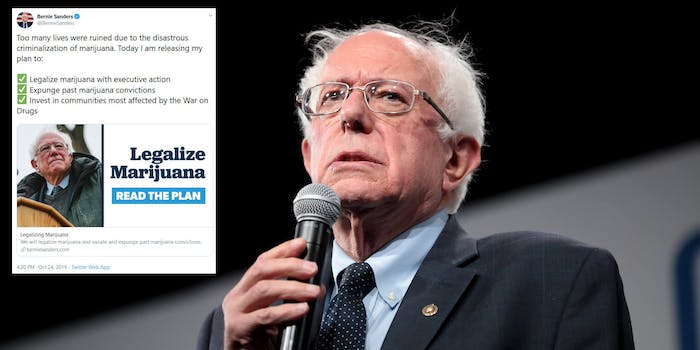 A lot of people noticed the reference.

The senator’s plan would legalize marijuana through executive action, expunge past marijuana convictions, and use funds to invest in “communities most affected by the War on Drugs,” Sanders tweeted.

Too many lives were ruined due to the disastrous criminalization of marijuana. Today I am releasing my plan to:

✅ Legalize marijuana with executive action
✅ Expunge past marijuana convictions
✅ Invest in communities most affected by the War on Drugs https://t.co/0xQSHn6F3U

Within the plan, Sanders said he would legalize marijuana through executive action within his first 100 days he’s in office and “ensure that revenue from legal marijuana is reinvested in communities hit hardest by the War on Drugs.”

“It is time to admit the criminalization of marijuana was a disaster, especially for communities of color, and allow those most impacted to move forward with their lives,” the plan reads. “Our job now is to legalize marijuana and vacate and expunge past marijuana convictions, and ensure that revenue from legal marijuana is reinvested in communities hit hardest by the War on Drugs.”

Sanders’s plan also calls for both state-level and federal marijuana convictions to be expunged and people to be re-sentenced.

The Vermont senator tweeting about his plan at 4:20pm ET—a weed reference—did not go unnoticed by people online.

Bernie released his marijuana legalization plan at 4:20PM on a Thursday. https://t.co/UWMvThFrFL