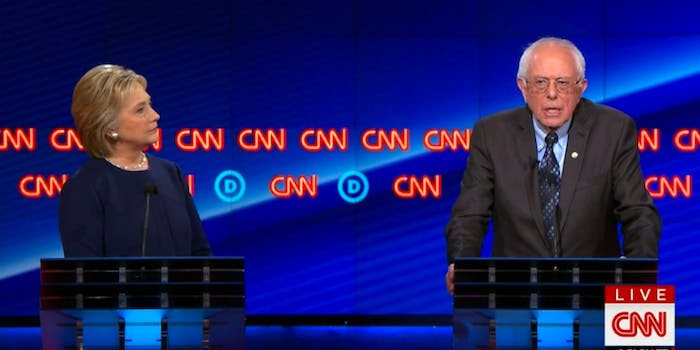 Bernie Sanders is feeling the burn—but not the kind you’re used to.

In one of the most heated exchanges of the 2016 Democratic presidential race, Sanders shot down challenger Hillary Clinton‘s attempts to interrupt his comments during Saturday night’s debate in Flint, Michigan.

After former Secretary of State Clinton criticized the independent Vermont senator for voting against the 2009 federal bailout of the American automotive industry, Sanders hit back hard.

“If you are talking about the Wall Street bailout, where some of your friends destroyed this economy…” Sanders said. Clinton then attempted to interject, but Sanders wasn’t having it.

Sanders then claimed Clinton’s story is “voting for every disastrous trade agreement, and voting for corporate America.”

“When billionaires on Wall Street destroyed this economy,” Sanders continued, “they went to Congress and they said, ‘please, we’ll be good boys, bail us out.’ You know what I said? I said, ‘let the billionaires themselves bail out Wall Street.’ It shouldn’t be the middle class of this country.”

The exchange has sparked mixed reactions online, with many on Twitter criticizing Sanders for belittling Clinton. Some—including a pro-Clinton super PAC—have compared Sanders’s reaction to that of former Rep. Rick Lazio (R-N.Y.), who suffered a meltdown in 2000 during a Senate race debate against Clinton.

The otherwise mild debate between Clinton and Sanders seems to have served the Vermont senator well online, with more people following the democratic socialist than the former first lady, according to Twitter.

Sanders remained more highly searched than Clinton throughout the debate, according to Google, though both candidates saw their search numbers spike over the two-hour exchange.

Also during Sunday night’s debate in Flint, Michigan, where national attention has centered on the community’s poisonous water crisis, Sanders won the Maine Democratic caucus, adding an estimated 14 new delegates to the 498 he currently holds.

Clinton remains the Democratic presidential front-runner, with 1,129 delegates, including 458 superdelegates, which are not awarded through state votes.

The pair of Democrats will compete once again this week, when voters in Michigan and Mississippi pick their choice of 2016 candidates from both parties on Tuesday, March 8.