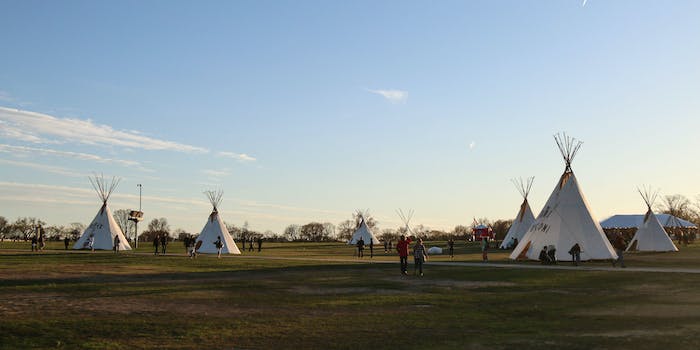 In the shadow of the Dakota Access Pipeline ruling, Native Americans camp out in D.C.

Kandi Mossett of the Indigenous Environmental Network is helping lead a four-day demonstration and encampment in our nation's capital.

Professional Anarchists is an ongoing photo series by Lisa Allen that aims to capture the peaceful demonstrations against the Trump administration and to meet the ordinary people behind them—to learn why they march and to put a face to the new resistance movement. In this inaugural installment, we meet Kandi Mossett, the lead organizer of the Indigenous Environmental Network, at the onset of a four-day protest in Washington, D.C.

The Native Nations Rise movement erected a tipi encampment on the National Mall on Tuesday in preparation for fours day of protest and prayer.

In the shadow of the Washington Monument, members of Native American tribes from across the country, organized via Facebook by the Standing Rock Sioux Tribe, the Indigenous Environmental Network and the Native Organizers Alliance.

The encampment coincided with International Women’s Day and came in the wake of a federal judge denying on Tuesday a request by the Cheyenne River and Standing Rock Sioux tribes to halt construction on the final piece of the Dakota Access Pipeline.

Why are you here and what are you expecting for the next couple days?

This is the Native Nations Rise event to show that Standing Rock is not over because they forced us off the land. It’s an issue we’ve been fighting for over 500 years, and the voice and the strength in the people continues in a peaceful, non-violent direct action way. And so we’re here basically, the short gist of everything is to demand consent, not consultation, and to recognize the rights of indigenous peoples. We haven’t gone anywhere over all these centuries and we’re going to continue to be here, in the protection of all humanity, which is that water is a human right. Clean water is a human right.

And for the next couple of days?

It’s a four-day event culminating in the march and rally on the 10th, and so we have programming and presentations. Today was International Women’s Day, so it was all women’s panels. Tomorrow there’s going to be more hip-hop caucus and different panels that are happening here and in other locations and in universities near to here. We’re going to have performances. Then starting at 10am at the Army Corp of Engineer offices will be our first place for our rally. We’ll veer off to the Trump [Hotel] area, and we’ll end up in Lafayette Park, where we have a full rally schedule which is all tribal nations leaders, youth, performers, artists that are going to be mixing it up between speaking and performing and speaking and performing. So a little bit of the intellectual part and a little bit of the arts all mixed together.

Have you felt like you’ve had support? Allies and people coming out?

That’s all I’ve felt is nothing but support. We haven’t had any negativity here. We haven’t had people coming that are against anything we’re doing, which is a really beautiful thing because that can sometimes happen. But it hasn’t and so I think everybody recognizes that we’re here in a peaceful way, protecting water which is for everybody. We’re expecting thousands of people to show up on Friday. We can’t exactly say if it’s 1,000 or 4,000 or even more than that, but that’s what we’re expecting thousands to show up and stand in solidarity with us.