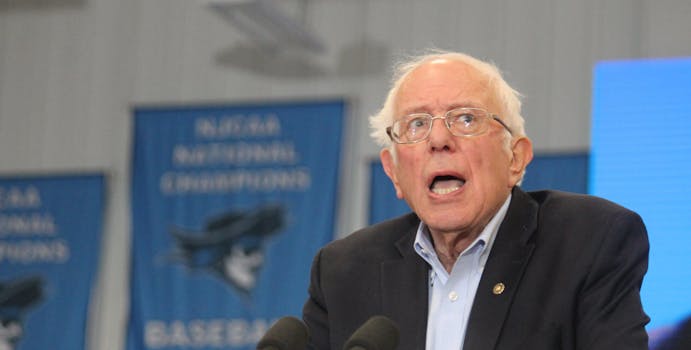 Tweets from Sanders supporters are terrifying the establishment

Bloomberg, Klobuchar, Warren, and a culinary union set their sights on the front-runner's fans.

Sen. Bernie Sanders (I-Vt.) has established himself as the Democratic front-runner, and polls show him opening up a wide margin on the field.

And heading into a crucial Nevada vote, an old retread of an argument against Sanders is being revived: His supporters are too mean online.

This morning, the reboot of the 2016 primary’s main storyline got a huge boost when the richest man in the race, Michael Bloomberg, complained that the tweets are too mean.

The one-minute spot highlights a number of tweets from some prominent online leftists that the Bloomberg campaign has deemed detrimental to the discourse.

“We need to unite to defeat Trump in November. This type of ‘energy’ is not going to get us there,” Bloomberg wrote in his tweet, which also linked to a video of Sanders saying Bloomberg wouldn’t provide the energy needed to beat Trump.

The tweets were primarily aimed at Bloomberg, although the campaign included some mentioning Sen. Elizabeth Warren (D-Mass.), as well.

This isn’t the only attempt in the past week to use tweets of Sanders’ supporters against him.

Last week featured a curious incident out west. One of Nevada’s largest unions, the Culinary Union, put out a statement that said it’s been “viciously attacked” for putting out a flier that was critical of support for Sanders’ signature proposal: Medicare-for-all.

“It’s disappointing Senator Sanders’ supporters have viciously attacked the Culinary Union & working families in NV simply because we provided facts on proposals that might takeaway what we have built over 8 decades,” the union wrote.

That was enough to set off a firestorm of criticism of Sanders’ online fans, so called-Bernie Bros, who dominated the “discourse” in 2016.

Sanders is “toxic” was one claim, as was his fanbase. And if an important union was so bothered by it to put out a statement, it must be bad.

That’s certainly one way to interpret it, but it’s not the only way. As many pointed out, in 1991, the Culinary Union went on strike for six straight years against the Frontier Hotel and Casino, eventually winning after the casino changed hands.

That a few (or even a barrage) of tweets would make this union buckle seems somewhat implausible, and Sanders’ supporters pointed this out, saying it’s also likely the union didn’t want to give up its own negotiated benefits in favor of government-run healthcare, and wasn’t willing to say that out loud.

Other candidates jumped on the statement.

“I stand with @Culinary226 and let’s be clear: attacks on the union are unacceptable,” wrote Sen. Amy Klobuchar (D-Minn.). Warren issued a similar statement.

Last week, another group decided that Sanders was too dangerous to be president. It was also too dangerous, the group wrote, to reveal the members of the group because they might get hit with tweets from Sanders fans.

The “Beat Bernie 2020” PAC chose not to say who was behind it because of “credible fear of threats and backlash from ardent Bernie supporters, a tactic they have become infamous for using ruthlessly on social media, especially Twitter.”

There was some speculation on Twitter that the money behind Beat Bernie 2020 is coming from a healthcare company that raised prices on EpiPens.

The new PAC and Mylan Pharmaceuticals are based out of the same address in D.C. and Mylan’s CEO has routinely been criticized by Sanders.

Mylan paid a $475 million settlement with the government after it raised the prices of EpiPens, used to prevent anaphylactic shock from allergic reactions. Mylan hiked the price of EpiPens nearly 400% then used shady accounting to incorrectly reimburse the government.

The real crime though, according to this PAC? Using Twitter to be upset about that.