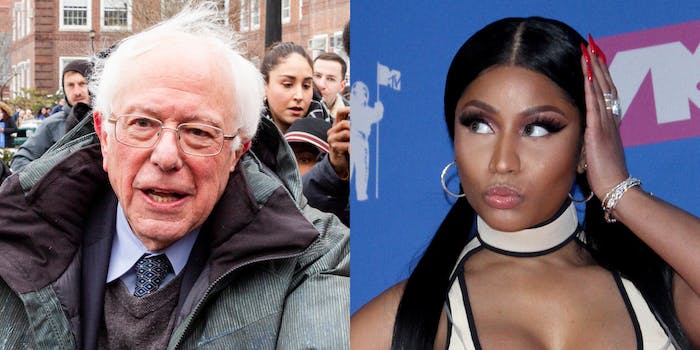 The Barbz and other music fandoms are laying down their arms in support of a common goal: dunking on Trump.

Nicki Minaj fans, known colloquially as Barbz, are no strangers to picking fights on the internet with people who don’t share their opinions. Lately, though, these diehard fans have channeled that energy from the musical realm to the political realm, mobilizing under a common hashtag: #BarbzForBernie.

According to Paper, the #BarbzForBernie movement began on Twitter in December, when @usedwifi implored other users to get the hashtag trending. Since then, the movement has migrated to TikTok, where users have sparred over issues such as women’s reproductive rights. Members of the #Barbz4Bernie camp have flooded conservative posters’ comment sections with Minaj lyrics and dunks on President Donald Trump.

Perhaps the most beautiful part of the #Barbz4Bernie movement is that it’s inspired warring music fandoms to lay down their arms and unite in support of a greater good. Fans of Cardi B and Remy Ma—two of Minaj’s most public rivals over the last several years—have seemingly called a temporary ceasefire to collectively drag Trump supporters through the mud on social media.

Minaj has yet to comment on the #Barbz4Bernie activity or endorse a presidential candidate; in fact, she has yet to tweet in over a month. But with newly appointed “queen of the proletariat” Britney Spears calling for the redistribution of wealth and strikes amid the coronavirus pandemic, now might be an auspicious time for Minaj to come out in favor of some progressive policies.