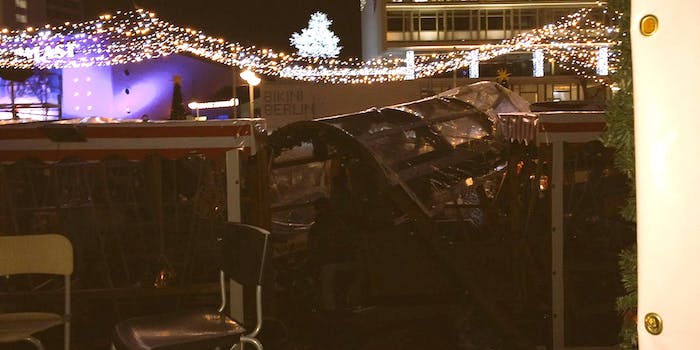 The driver was arrested fleeing the scene.

At least nine people have been killed and dozens injured on Monday night after a 19-ton truck crashed through Berlin’s Christmas market in what German police believe to be a deliberate attack.

Witnesses reported that the vehicle entered the market at high speed, around 40 mph, crusading through stalls before slowing to a stop. Video footage circulating on social media shows members of the public rushing forward to help the injured.

Lorry just ploughed through Christmas market in #berlin. There is no road nearby. People crushed. I am safe. I am safe pic.twitter.com/63iWMmdSKr

Police and ambulance services were quick to arrive on the scene at Breitscheidplatz. The area is popular with tourists who visit the jagged ruins of Gedächtnis Kirche, a church bombed in World War II.

The market has since been cleared as a security operation begins and medical professionals tend to the injured.

German media claim that there were two individuals in the truck. The passenger appears to have died in the crash while the driver, who allegedly attempted to run from the scene, has now been arrested. Still, German authorities have warned the public to stay at home and are calling the incident a deliberate terrorist attack.

According to early reports, the Polish company that owns the truck lost contact with the driver around 4pm CET in what appears to be a hijacking.

Truck owner tells @TVN24BiS his cousin drove the truck from Poland but that he is sure he did not cause the crash https://t.co/oXLfHpaRp3

A travel warning had been released by the U.S state department in November after receiving what it described as “credible information” of potential attacks on Christmas markets.

The attack is reminiscent of one which occurred on Bastille Day in France this past July that resulted in the deaths of 86 people. That attack was claimed by so-called Islamic State.

Incidentally, the November issue of ISIS’s magazine, the militant group specifically called on followers to carry out lone wolf attacks in the West. Terrorists were told to target markets and busy streets: “a vehicle is plunged at a high speed into a large congregation of kuffar,” or non-believers, the article reads.

Police are instructing anyone looking for someone who may have been at the site of the deadly crash to call 030 54023 111.