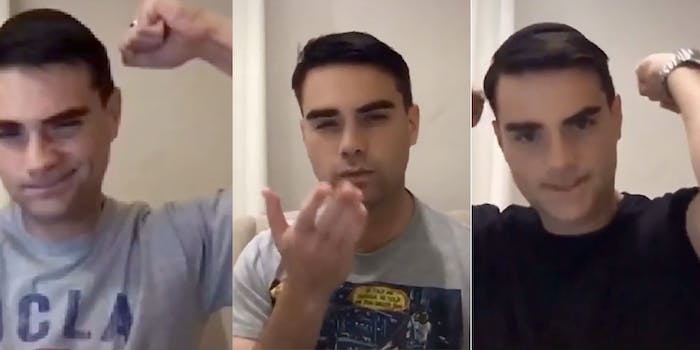 This is the kind of gun show where you don't flex your Second Amendment rights.

A TikTok user claiming to be a Ben Shapiro fan asked him to take her to the gun show—the “showing off your muscles” kind, not a literal gun show—and he’s obliged, leading to a series of videos in which the conservative commentator flexes on command.

The TikTok user (identifying as Rachel S, going with the username @benshapiroishot) has built a site of what appears to be online interactions between Shapiro and his fans—or trolls—who try to get him to show off his muscles in various ways.

In one, he reads what is ostensibly a question from a fan from his laptop, “Can you give us a gun show while smirking for a good photo op?” Shapiro, now 37, says, “Okay, let’s do this thing and get it over with.”

In another video, he says, “with the permission of my wife,” before blowing a kiss and then going into a flex.

He does show that he has some limits, though: One video is a series of clips in which he refuses—despite the urging of fans—to go shirtless or otherwise show his abs on his show.

It’s not all live clips of the conservative podcaster, though: One video is a brief ad for a “Ben Shapiro cologne,” which shows Shapiro walking from soft-focus to proper focus, before the video cuts a fake cologne bottle that reads, “Facts: Eau de Leftist Tears.”

The author of the account, who started it this past September, claims that Shapiro is her “biggest celebrity crush.” The bio features a picture of a young woman, though avatars that don’t look anything like you are easy enough to create.

The bio simply reads, “I ❤️ Ben Shapiro & often ask him to flex for us. Follow my Insta for MUCH more,” but an internet search doesn’t turn up a parallel IG account.

TikTok isn’t the only place you can find a Ben Shapiro gun show, though. It’s possible to order a Ben Shapiro “Welcome to the Gun Show” button from the CuteRepublicans account on Redbubble, if that is your thing. (You can also get a button of Shapiro in a pink bunny costume, if that is instead or additionally your thing.)