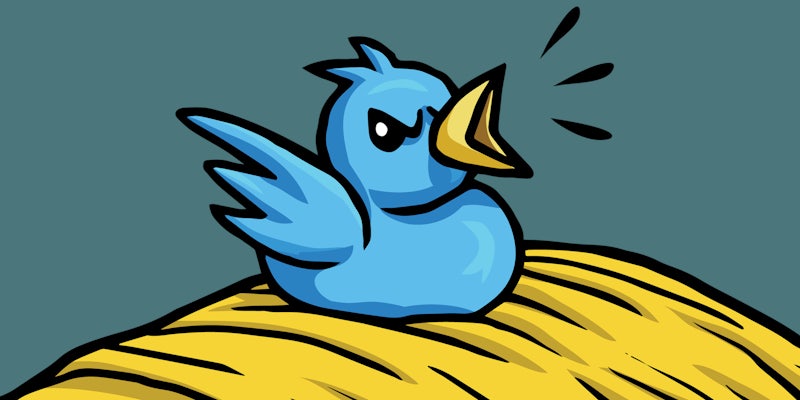 Mass reporting is on the rise.

Fans of conservative mouthpiece Ben Shapiro seem to be exploiting Twitter’s rules to banish their political opponents from the platform. They and other conservatives have made a habit of mass reporting people who don’t agree with them.

Three high-profile Twitter users tell the Daily Dot that Shapiro’s fans have targeted their accounts, trolling and reporting them for breaking the rules. All have been suspended over tweets denigrating Shapiro. There is no evidence that Shapiro himself is personally involved.

Shapiro did not respond to multiple requests for comment.

“They’re a relentless lot and vile to say the least,” comics artist Eli Valley (@elivalley) said of Shapiro’s following. Last month, Valley was among the Jews arrested during a Tisha B’Av protest over Amazon’s ties to U.S. Immigration and Customs Enforcement. When he got out of jail, his Twitter account was locked.

While he was sitting in a cell, at least 15 of his tweets, many months old, had been reported. Twitter then suspended his account, citing its rule against abuse and harassment. He appealed to no avail. Several of the tweets were deeply critical of the Republican Jewish Coalition; he referred to it as “worse than Kapo filth” numerous times. (Kapo is the term for Jews who helped the Nazis during the Holocaust.) Twitter even flagged one of his comics that was published in Jewish Currents.

Valley quickly created a second account to detail his suspension. That soon got locked too, on the grounds that he was impersonating himself.

Account got locked just now, asap after I tweeted the above, for these 3 tweets. I deleted them instead of appealing so I could come back, but I know they're gonna lock me again bc N*zis and Tr*mp J*ws are mass reporting. If any non-N*zis work at Twitter and can help, thank you. pic.twitter.com/dEBas5Ytu5

Rather than lose his verified account and its nearly 67,000 followers, Valley deleted the tweets. “I use Twitter as a news source too, they’re not just silencing me in terms of my free expression, they’re limiting my ability to find out what’s happening in the world,” he said.

It is not clear who reported Valley, or whether it was even Shapiro fans. Valley said that the reported tweets were “specifically about Republican Jews,” of which Shapiro is the most prominent.

Now that he’s become a target, it may be only a matter of time before mass reporting gets Valley suspended again for tweets like last month’s political cartoon about Ivanka Trump.

Reporting liberals to purge them from Twitter has become a weapon of choice for conservatives. The Daily Dot found evidence of organized mass reporting on both sides of the aisle, but it is particularly popular on the right.

On Aug. 13, behavioral scientist and National Observer reporter Caroline Orr wrote a thread about what she calls “outrage trolls.” These people post intentionally outrageous takes as “bait,” Orr thinks, so that when people respond with angry tweets the outrage trolls can then report them.

“[I]t’s also really easy to get your account suspended if people are waiting to mass report you for cursing, etc.,” she writes, adding in the subsequent tweet, “This is especially true for large accounts, because many of your followers will jump in, too, and the tweet will spread further. This also puts unwitting users at risk of getting mass-reported.”

A search for the terms “blocked” and “reported” reveals many instances of people proudly proclaiming their efforts to get others kicked off the platform. There are even entire Twitter accounts dedicated to boasting about getting people kicked off Twitter. Some endeavor to purge impostors of celebrities they admire, some target trolls or people who send unsolicited nudes, some simply focus on getting rid of people they don’t agree with.

@Twitter. Yesterday, I and others reported violent videos and comments to kill McConnell, Shapiro and others, yet you refused to erase them. Now, you have suspended an election campaign for the same reasons. You cannot be biased and retaliate unequally. https://t.co/nBRdNI3wkk

Twitter did not respond to the Daily Dot’s questions although a spokesperson on two different occasions said that it would.

Emails from Twitter claim that the three people who were suspended violated the rule against hateful conduct that broadly prohibits promoting violence, threatening, or harassing people. All said they have been trolled viciously on the platform. Reporting the abuse, they said, seems to go nowhere. To them, Twitter’s enforcement of its rules is inconsistent, opaque, and exploitable.

Large, outspoken accounts like theirs seem to be particularly susceptible to attacks. Once they got on the trolls’ radar, a short trip to “Twitter jail” was almost a short-term certainty.

The company’s rules state that it does not factor in the number of reports to determine punishment. But its reliance on users to report bad behavior seems to have created an opportunity for like minds to report perceived violations en masse in a war of attrition.

Ally Maynard is a writer and producer on MTV’s Ridiculousness. She also does social media management.

On Twitter, Maynard (@missmayn) frequently sounded off on feminism, culture, and politics. Maynard’s razor-sharp, no-holds-barred style eventually earned her 95,000 followers. She’d already been warned once—for tweeting that then-Sen. Paul Ryan should be slapped in the face, which she said she understood—when she responded to Shapiro trying to explain his remarks about baby Hitler by tweeting, “Suck my clit, Ben. It’s about eye-level for you.”

“I was immediately suspended for a week,” Maynard told the Daily Dot.

Shapiro’s loyal following wasn’t soon to forget. When her suspension ended a week later, Maynard was inundated with hate and abuse.

“I spent the next week getting dozens of tweets an hour from Ben Shapiro people and fans,” she said. “I think that is really indicative of the way Twitter enforces its terms of service.” She provided several of the tweets to the Daily Dot; in them, trolls insult her looks, genitals, and accused her of having sexually transmitted diseases.

Maynard was later permanently banned for a tweet about Rep. Nancy Pelosi (D-Calif.). On July 23, Twitter denied her appeal.

It is unknown who reported Maynard’s Pelosi tweet. But someone determined to silence a feminist voice could easily have reported it to get her kicked off the platform, which appears to be the end game for some prolific reporters.

“I think there are groups, whether it’s a fan base or it’s a bot network, that will hone in and mass report a tweet,” Maynard said.

When a Fox News anchor read one of his tweets calling Shapiro the “Uncle Tom of Jews” to Shapiro on live air last December, Litvin attracted the interest of the tweet-reporting army of his fans.

Litvin told the Daily Dot that since then he has been consistently trolled by Shapiro’s fans.

“At this point, I just mute right away…. I could have more trolling than I know,” Litvin said.

His profile has also been suspended four times, most recently on July 23, when he was permanently banned. Each time, Litvin has appealed and won. The permanent ban was lifted after a few hours with Twitter’s apologies “for the inconvenience.”

Some wonder if these suspensions are indicative of Twitter attempting to correct the perception among conservatives that it is biased against them. This, coupled with a surge in conservative mass reportings, might be getting liberals kicked off the platform for what many view as legitimate dissent, humor, or analysis.

Valley has recently been blamed for the Dayton mass shooting by conservatives on Twitter, apparently because the shooter retweeted him a few times. He’s also been called a Nazi and a misogynist.

Litvin has had a similar experience based on his opposition to Zionism. “A lot of advocates for BDS, especially Palestinians, are being targeted,” he said. A representative from the Boycott, Divestment and Sanctions (BDS) movement, which is Palestinian-led and calls for Israel to reconsider its approach to international law, told the Daily Dot via email that the organization has also been reported multiple times on Twitter; it was cleared each time.

For people who have been targeted by mass reporters, Twitter’s enforcement and consistency leave much to be desired.

“Donald Trump has said so many racist things, do you think they’re going to suspend him?” Litvin said.

“The president can call someone a horse face and that flies,” Maynard said.

Although their experiences with Twitter have left them with mixed feelings, all said that the platform is practically essential to their livelihoods. Valley uses it to distribute his comics and direct people to his Patreon, telling the Daily Dot it’s his “main method of communication with my readers.” Litvin considers it an important battlefield in the war of ideas between Israeli and Palestinian supporters.

“I’m a social media producer and I have been permanently banned from Twitter. It’s going to be very difficult to me to network and make money,” Maynard said.

Yet the more they are rewarded with followers and engagement, and the more they come to rely on the platform professionally and as a source of news and information, the greater risk they seem to run of becoming a target for trolling and, increasingly, reporting by conservatives who disagree with their views.

And hell to them if they insult Ben Shapiro.

“I’m just shit out of luck for being targeted,” Maynard said.