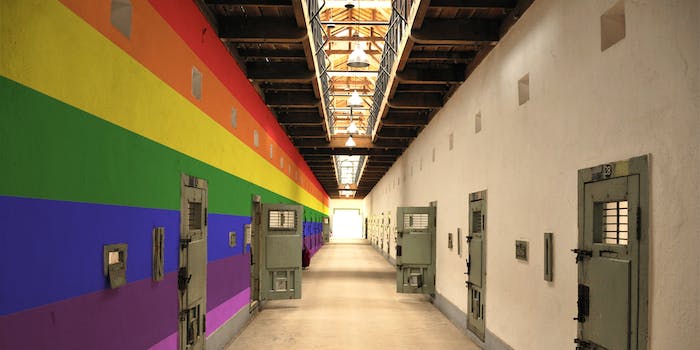 This is just mind-blowingly stupid.

Being gay isn’t a choice, but neither is being dense. On Wednesday, Dr. Ben Carson, one of the foremost conservative agitators in the United States, inveighed against the former while acting like the latter.

Carson announced on Tuesday that he had launched a presidential exploratory committee to prepare for the 2016 election. On Wednesday, he amped up his media profile by telling CNN his deep thoughts about what consenting American adults should and should not do in the privacy of their own bedrooms.

While questioning Carson about his position on same-sex marriage, CNN host Chris Cuomo drew a direct parallel between America’s dark history of racial discrimination and slavery and modern-day discrimination against non-heterosexuals, citing the constitutional right of all citizens to equal protection under the law.

Denying same-sex couples the right to get married is not discrimination, he argued, because being gay is a choice, while being born black is not.

Asked to qualify his remarks, Carson said, “Because a lot of people who go into prison, go into prison straight—and when they come out they’re gay.”

“So,” Carson continued, “did something happen while they were in there? Ask yourself that question.”

Gay Americans would adamantly refute Carson’s claim if they were on CNN with him, but there are plenty of biologists who study human sexual orientation and are armed with peer-reviewed scientific research to do that for them.

Carson’s myopic prison analogy was the piece of his comments likely to most offend people, but his apparent interpretation of equality and freedom was the piece that truly betrayed his character.

The basis of Carson’s argument—that Americans are only granted equal protection under the law for inborn traits—has no foundation in reality. Given his aspirations, this misunderstanding is distressing.

Under the 14th Amendment, which is central to the current U.S. Supreme Court case challenging same-sex marriage bans, state governments are prohibited from passing laws that deprive “any person of life, liberty, or property” without due process of law or denying any person “equal protection of the law.”

Fewer than 50 years ago, other men standing in Carson’s place argued that the 14th Amendment’s Equal Protection Clause did not apply to women who faced gender discrimination.

Englishman John Locke wrote in Two Treatises on Government that protecting life, liberty and property, or the natural rights of citizens, was the only purpose of government. Any seventh-grade U.S. history student would recognize this as the basis of America’s democracy.

“The need to find true happiness,” Locke wrote, “is the foundation of our freedom.”

It’s unfortunate, or perhaps just plain sad, that Carson’s presidential campaign will eschew the opportunity to defend the right of every American to pursue his or her own happiness.