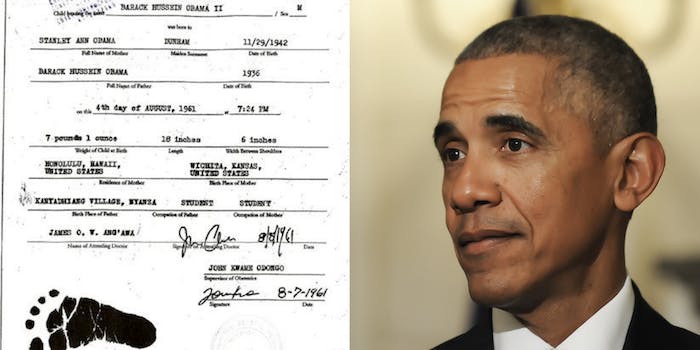 Birtherism is back, and we have Barack Obama‘s half-brother to blame.

Malik Obama, an outspoken supporter of President Donald Trump, tweeted on Thursday an image of a forged birth certificate that falsely claims that the former president was born at the Coast Province General Hospital in Mombasa, Kenya.

This exact image has been floating around the conspiracy levels of the internet since 2009, when a man named Lucas Smith attempted to sell the fake document on eBay for $1 million.

The original Obama birth certificate forgery was created by attorney and dentist Dr. Orly Taitz Esq. After failing to convince the world that her forged Obama birth certificate was real, Taitz later used Smith’s fake birth certificate in a 2009 case, Rhodes v. MacDonald, as evidence that Obama was born outside the United States and thus ineligible to be president. A judge dismissed the case and threatened Taitz with legal action for filing fake documents in a court of law.

Regardless of its complete fabrication, the Smith document is now being circulated by prominent right-wing blogs without a lick of fact-checking or skepticism.

The prominence and longevity of the birther conspiracy theory are largely the work of its most high-profile adherent: President Trump. The former reality TV star and real estate mogul spent years spreading the birther theory. Trump’s adherence to a false reality and penchant for discussing it on national television is believed to be one of the reasons the Obama White House released his long-form birth certificate online in 2011. Trump remained committed to the birther theory until just before his election as president of the United States.

Let's take a closer look at that birth certificate. @BarackObama was described in 2003 as being "born in Kenya." http://t.co/vfqJesJL

Attention all hackers: You are hacking everything else so please hack Obama's college records (destroyed?) and check "place of birth"

In September 2016, Trump admitted that Obama was in fact born in the U.S. “President Barack Obama was born in the United States, period,” Trump said at a press conference. “Now we want to get back to making America strong and great again.”

Malik Obama’s tweet comes amid a new conspiracy theory about President Obama, as the Trump administration has called on Congress to investigate President Trump’s unsubstantiated claims that Obama ordered surveillance on Trump Tower ahead of the 2016 election.