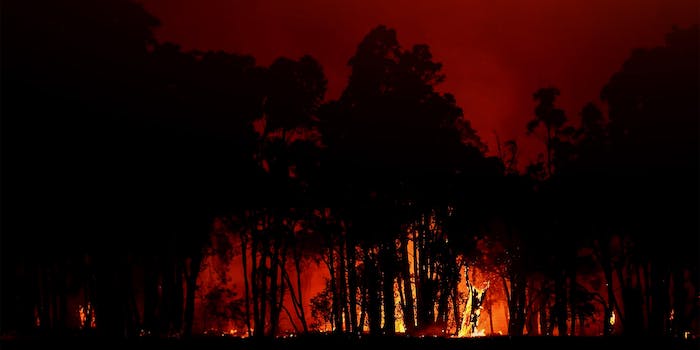 With nearly 200 arsonists arrested in Australia some say this disproves climate change. The reality is more complicated.

With the revelation that 187 people have been arrested for arson in Australia, deliberately starting some of the bush fires that have ravaged the continent over the past few months, many on the right are claiming this disproves the argument that climate change is behind that catastrophe.

However, the truth is more complicated than that.

Between 50-87 % (the variation is due to different means of data collection) of Australia’s bush fires are man-made, and those numbers remain consistent from year-to-year.

This year is no exception, yet the scale of the bush fires has been catastrophic.

Additionally, 29 of this year’s arrests were made between July and September, before the catastrophic fires began. Many of the arrests made after that point were cases of negligent fire-starting rather than intentional, still classified as arson because they resulted from prohibited behaviors, like lighting a campfire or burning off excess vegetation at times where there was a total fire ban in place.

That means many of these cases of “arson” were actually the result of small, contained blazes that raged out of control due to environmental conditions, conditions that are the direct result of climate change.

Yes some are arson.

So how did all the others start then?

Links between climate change and the rate that all fires are grow well proven.

Are you kidding? Any fire set by an arson is spinning out of control, embers flying km’s to light new blazes. The condition of the country due to climate change has given the breeding grounds for the catastrophe. At this point Australia is basically kindling. pic.twitter.com/qgc2O6T6Kl

There are on average over a thousand 'arson arrests' per year in Australia. They don't relate directly to these bush fires, but to illegal negligent behaviour (backburning without permission, barbecues when banned, failing to obey fire safety regs etc). Arson is a red herring.

Essentially, arsonists are a scapegoat for conservatives to point to instead of talking about the impact of climate change on Australia’s bush fires. And climate change denialists are latching onto the news hard, using it as a way to shoot down any discussion of climate change, since it doesn’t fit their preferred world narrative.

Arson jihad against Australia set the fires. #WeThePeople KNOW. After robing, raping, consuming and kidnapping Haiti's children on behalf of your "charity", how dare you try your international grifting stunt again?

Once again… Almost 200 people arrested in Australia for ARSON… 85% of the fires have been started by people. 55+% of those via ARSON. Nothing to do with Climate Change.. Main issues are the #Left who have refused proper backburning and fire breaks. Not CLIMATE CHANGE!

God you people are dumb. Most of these fire were started by arson! I pray for the people of Australia it’s horrible!

While some are limiting themselves to tweeting aggressively at celebrities and climate activists about how they are wrong, others have bought into conspiracy theories about the fires as well.

A number of climate denialists on Twitter seem to believe that environmental activists are the ones responsible for the fires. Some inaccurately blame the Green Party’s policies for exacerbating the fires once they started, but others outright accuse climate change activists of starting the fires themselves to prove the validity of their cause.

Yeah there are, climate change isn't one of them. The government not allowing back burning in the main part of Australia is what has cause the other fires. There are fires every summer in Australia. It's worse this year due to arson.

These climate activists lie!!!! Story is out today!!! Over 200 people charged for arson in Australia!!! The activists are the danger to us!!! Wake the hell up!!! https://t.co/jSGi5g6xK5

I think we can reasonably suggest at this point that many fires were started by liberals and other feminists in order to push a "climate emergency" narrative. When will liberals hit rock bottom?https://t.co/nFBaFae00d

How do over a hundred fires simultaneously start around Australia? media is complicit in hiding these arson figures. Begs the question are many of these arsonists 'climate change arsonist' @EmeraldRobinson @RitaPanahi @nyunggai https://t.co/W3GYwnSofd

Others believe the government is responsible, either setting the fires to justify a carbon tax (which climate denialists see as a cynical cash grab) or to clear land for building purposes, such as a high-speed rail.

You are aware over 200 people in Australia have been arrested for starting fires!

But a excellent reason for liberals to tax grab,

So why would you care, right! pic.twitter.com/F67RyHetEO

#WhoLitTheFires #Australia … who did it !! Why did they do it?? and were they PAID to do it??

Climate scientists say that this summer is only a preview of what is to come and that bush fire season will only get worse each year unless climate change is addressed.