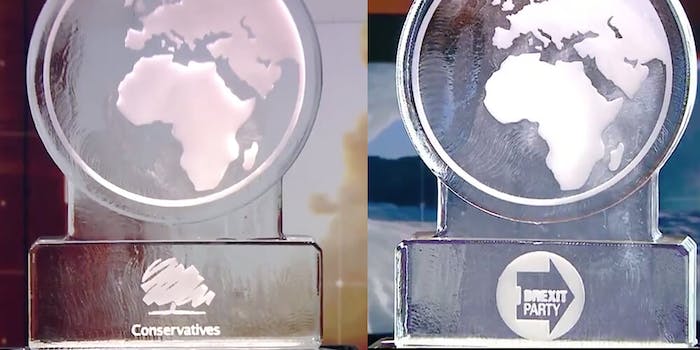 After two political leaders refused to attend a climate debate hosted by U.K.’s Channel 4 on Thursday, the TV network decided on a very special replacement for them.

Instead of empty chairs, British Prime Minister Boris Johnson and Brexit Party Leader Nigel Farage were represented by ice sculptures. As the debate went on, the sculptures melted under the studio lights—and brought to mind the state of the planet.

Amid the televised debate, arguments sparked on Twitter about climate change and Channel 4’s response to Johnson and Farage’s absences.

And yet two Brexiteers couldn't face it. Funny, that.

Some said it was an appropriate and clever way to get the point across.

Should have been melting statues of the actual criminals involved

This is journalistic integrity. Fair play.

Others saw it as disrespectful and a sign of Channel 4’s lack of neutrality. One Twitter user said the network is “politicized and fixated on issues.”

Channel 4 News is really losing it, I remember when it was a channel you went to for news everynight. Impartial and extensive. Now it has turned into the TV equivalent of the Independent. Politicised and fixated on issues.

But many applauded the stunt.

Can’t wait for the snap polls! Who won the climate debate?

No disrespect for the ice sculpture, but that doesn't take a lot.

I’m glad that Channel 4 have replaced Boris Johnson with an ice sculpture. It might not cut through to his ageing voter base but future generations will see it as history – some politicians just didn’t care that the planet is fucked

If only the ice sculptures were portraits of Boris and Farage themselves, some said.

Actually thought they'd commissioned an ice sculpture *of* Boris Johnson for the #ClimateDebate. Rather disappointed to discover otherwise.

well, they’ve already said if they win they’ll be reviewing Channel 4’s broadcasting license. not at all dystopian!

Update Nov. 29, 9:50am CT: This post was corrected to state that Boris Johnson’s Channel 4 threat occurred before the debate aired.