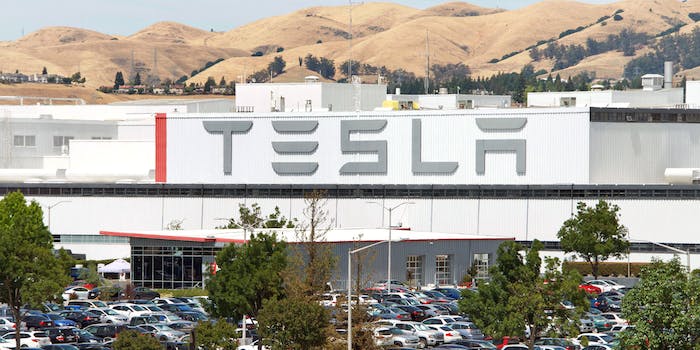 Tesla has offloaded concerns about diversity to public schools employees.

Sprawled out over 2,500 acres along the Colorado River, Tesla Gigafactory 5 or “Giga Texas” opened its doors on the edge of East Austin in Del Valle earlier this year. This was after Tesla received a $68 million tax incentive package with Del Valle Independent School District (DVISD) as part of its deal to come to the Lone Star State.

As part of the arrangements, Tesla was to work with several Austin schools to create pathways into the company’s workforce. But the company, and the partnership, has been met with backlash from the local community.

“I personally feel like Tesla’s partnership with Del Valle school is not really a community partnership,” said Alexia Leclercq, communications director for PODER, a political organization based in Austin. “It’s more like they see these students as potential workforce.”

A workforce that Tesla is under no obligation to actually hire.

Partnering with local schools like DVISD, Tesla careers are being foisted on students as early as middle school through a “global education model” known as P-TECH. Though the program has been around for a few years, the partnership with Tesla is just beginning.

P-TECH, created by the tech company IBM, stands for “Pathway in Technology Early College High School.” Schools across the country that offer this program work with local companies to create curated educational paths through internships and classwork that could potentially lead to a job with that company.

It seems as though Tesla is now considered “local.”

Upon completion of the program in high school, students have the ability to continue their Tesla-focused education. A popular choice is to move on to Austin Community College (ACC) where students would again participate in another Tesla-based program called “START.”

Applicants who wish to participate in the START program are actually selected by Tesla before they begin at the community college.

Still in its infancy, the program right now allows only 12 students per term. For all the incentives it’s been offered, Tesla is only taking in .004% of just the average Del Valle’s graduating class, students that the company hand selects and approves.

And may still not hire.

“The students have to apply first to Tesla,” said Laura Marmolejo, department chair of manufacturing at ACC. “Tesla decides when the person is selected. I can’t honestly say a hundred percent what they’re looking for.”

If the students choose to continue their education, following this path could potentially earn students a spot working in manufacturing at the Texas Giga factory, but it is not guaranteed.

Tesla did not respond to the Daily Dot’s request for comment about its partnerships with Austin schools.

“The whole employment part is Tesla’s decision at the end of the day,” Marmolejo said. “If they feel the students somehow didn’t perform during that time frame or any issues came up, there’s no guarantee.”

While the scant opportunities may look good on paper, local community members are worried about Tesla’s lack of commitment to diversity and possible exploitation of young Austinites.

As population increases and gentrification soared through the community of East Austin, a predominantly low-income and Hispanic area of the city, locals reluctantly welcomed their new tech neighbor.

PODER, which serves as a social justice organization for the people of East Austin, has worked closely with local government representatives as well as Tesla to increase “community engagement.”

However, according to Leclercq, Tesla failed to address issues of gentrification and diversity in one of Austin’s most historically poor areas. She said that while the company may view its partnership with the schools as community outreach, they don’t see it that way.

“The partnership is not necessarily them giving back to the community,” Leclercq said. “It’s very much them viewing the school and the potential students as work, as potential labor. So, it’s very much benefiting them and it’s not a form of community engagement that we are demanding.”

Tesla has long struggled with diversity problems in its workforce. Just last month, Tesla reportedly laid off the head of the company’s LGBTQ+ initiative and an engineer that volunteered with the diversity and inclusion team.

That same month, 15 Black Tesla employees filed a lawsuit against the company amid allegations of racial abuse and harassment.

Now it seems these issues have followed the company all the way to Giga Texas.

Documents obtained by the Daily Dot via FOIA request sent to DVISD show that when it comes to upping diversity at the multi-billion dollar company, Tesla is “particularly interested” in what the school can do for them.

“The Tesla Team is particularly interested in learning how the DVISD Team plans to increase diversity among the future P-TECH cohorts,” said one Tesla representative.

It appears that the work of building a diverse pool of applications to join Tesla falls to the school and not the company.

That offloading appears to be indicative of the company’s approach. It blew off this issue in a local community meeting between the company, PODER, and other East Austin representatives.

Notes from this meeting obtained by the Daily Dot from a member of PODER highlight the lack of transparency on Tesla’s part.

“I don’t think your question deserves a reply,” said one Tesla representative when asked about community transparency, diversity, and internal data collection, according to the notes.

That’s not the only time Tesla was uninterested in divulging information about its relationship with Texas schools. The Daily Dot sent out a FOIA request to ACC asking for communications between the school and Tesla. In a letter to the Texas Attorney General’s office, Tesla intervened, asking that a multitude of redactions be pulled from the records request.

To add to the secrecy, prior to the interview with Marmolejo, ACC’s media relations coordinator informed the Daily Dot that they would not be able to speak about any of Tesla’s manufacturing details.

The Daily Dot reached out to several Tesla employees working with the various school programs but did not receive any responses.

Emails obtained by the Daily Dot via a FOIA request to ACC also show that Tesla refused to allow students to be interviewed by the media.

“Let’s avoid student interviews for now,” said a representative from Tesla in an email with ACC employees.

Tesla’s interest in the student population of local schools begins earlier than some might imagine.

Other documents gathered by the Daily Dot via a FOIA request sent to Bastrop Independent School District in the surrounding Austin area show that Tesla begins targeting students once they reach middle school.

Students in this district are prompted to start thinking about their future in with the company as early as 6th grade. Laid out for the kids in a neat PowerPoint showcasing the partnership, Tesla says it provides a “gateway to technology” in exchange for a possible job down the road.

While the starting level for the P-TECH program doesn’t begin until the 8th grade, Tesla aims even younger.

“The base target for this grant will be after school robotics programs at every elementary, middle high, and alternative school in the district,” said a representative from Tesla.

But the students aren’t the only element of the program Tesla is molding. STEM teachers in this district are able to receive “professional development from the Tesla Team.” In reality, that means their curriculum related to the program will be reviewed by Tesla engineers and employees.

In the same set of documents obtained from DVISD, Tesla is offering “externships” for teachers.

“We have had teachers submit curriculum for review and feedback to engineers, and would love to be able to build on this locally,” said a Tesla representative.

The intensity of this partnership, however, comes as no surprise considering the $68 million tax incentive Tesla received from Del Valle in 2020.

In July 2020, when Tesla was considering building its new Gigafactory in Texas, a tax package that would cap Tesla’s “taxable property value” at $80 million dollars over the next ten years, was approved by DVISD

This would save Tesla millions of dollars in taxes. Subsequently, this would also allow Tesla first grabs from the young Austin workforce. But as of right now, the partnership doesn’t seem to be providing much in the way of opportunity.