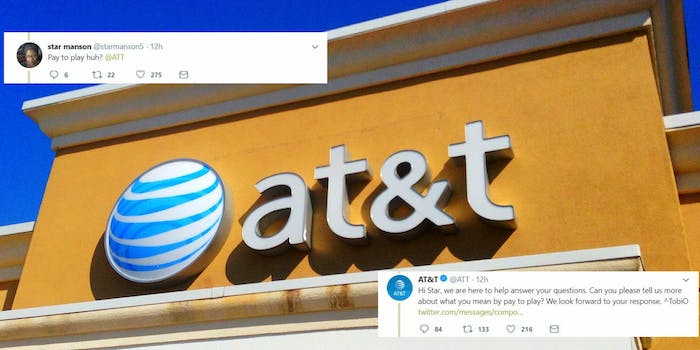 The company admitted to sending payments to Trump's lawyer—and now it's getting roasted.

These transactions are part of Washington’s pay-to-play culture, where businesses pay government entities for benefits, like influence over legislation or access to information. While a legal grey area, pay-to-play is widely scorned by the public, which is why AT&T is already getting slammed on social media.

One particularly brilliant exchange was discovered by Splinter in the replies to a tweet by CNBC reporter Christina Wilkie.

It starts with a user looking for help getting new cable and internet services with the company. AT&T then suggests the customer must purchase a bundled deal before it will step in.

“We are here to help! Here’s a link providing the bundled deals we have to offer https://soc.att.com/2rt9vMz  Give it a shot, DM us, and let us know if that works. We’ll be on standby awaiting your reply!”

Sadly, the innocent social media manager or customer service bot on the other end isn’t familiar with the term and embarrassingly asks to learn more. (In their defense, there are many other forms of pay-to-play).

“Hi Star, we are here to help answer your questions. Can you please tell us more about what you mean by pay to play? We look forward to your response. ^TobiO”

The succinct tweet is one among a flood of backlash against AT&T for its actions. People on Twitter are accusing the company of bribery while others threaten to leave for another mobile carrier.

BRIBERY. Bribing a dirty lawyer for the installed POTUS for favors. I need to get rid of my service with @ATT

AT&T’s $200,000 payment was made out to a shell company Cohen created called Essential Consultants, which allegedly received more than $4.4 million from major U.S. companies and most concerningly an oligarch with ties to Vladimir Putin. The same bank account was used to send payments to adult film actress Stormy Daniels to keep her from discussing her alleged affair with President Trump.

AT&T claims Cohen’s company “did no legal or lobbying work” and that the contract between them expired in December 2017. But the transaction is sure to raise questions. AT&T is currently pursuing an $85 billion acquisition of Time Warner, which the U.S. Justice Department sued to block. The company is also looking to make changes to net neutrality regulation.