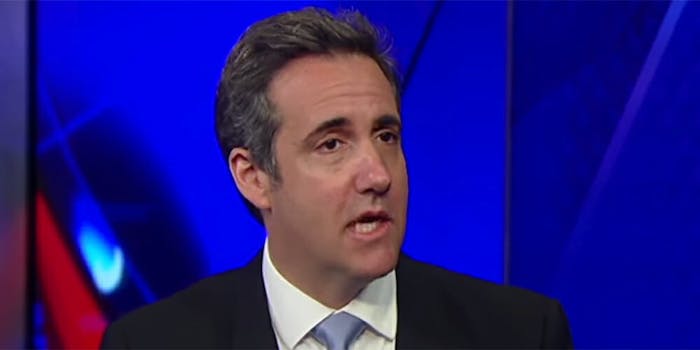 A Russian oligarch with ties to Russian leader Vladimir Putin has been questioned by special counsel Robert Mueller’s team about payments made to President Donald Trump’s attorney, Michael Cohen, after the 2016 election, CNN reported on Tuesday.

Viktor Vekselberg is a chairman of a company called Renova Group and has been sanctioned for activities including election interference. The Daily Beast reported Tuesday that it can confirm Cohen received hundreds of thousands of dollars from Vekselberg’s company. A source familiar with the issue told CNN that Vekselberg has been investigated by Mueller’s team, which is investigating Russian collusion by the Trump campaign during the presidential election.

According to CNN, the purpose of the payments from Vekselberg to Cohen and the nature of their business relationship is unclear. The FBI raided Cohen’s home and office last month as part of a criminal investigation.

Stormy Daniels’ attorney, Michael Avenatti, alleged in a tweet on Tuesday that Cohen received $500,000 from a company connected to Vekselberg following the presidential election. Avenatti further alleged the payment went into the bank account that Cohen pulled $130,000 from to pay Daniels to keep quiet about an alleged fair with Trump.

Avenatti also said Tuesday that drug company Novartis and telecommunications giant AT&T both made payments to Cohen’s firm. AT&T admitted it paid $200,000 for “insights” about the Trump administration.

Update 7:24pm CT, May 8: The New York Times reported Tuesday that the shell company used by Michael Cohen to make a hush payment to Stormy Daniels received a total of more than $1 million from the U.S. company connected to Russian oligarch Viktor Vekselberg.

According to the Times, “Transactions totaling at least $4.4 million flowed through Essential Consultants starting shortly before Mr. Trump was elected president and continuing to this January.”

Other payments came from Novartis, aircraft manufacturer Korea Aerospace Industries, and AT&T, the Times confirmed based on documents and interviews.