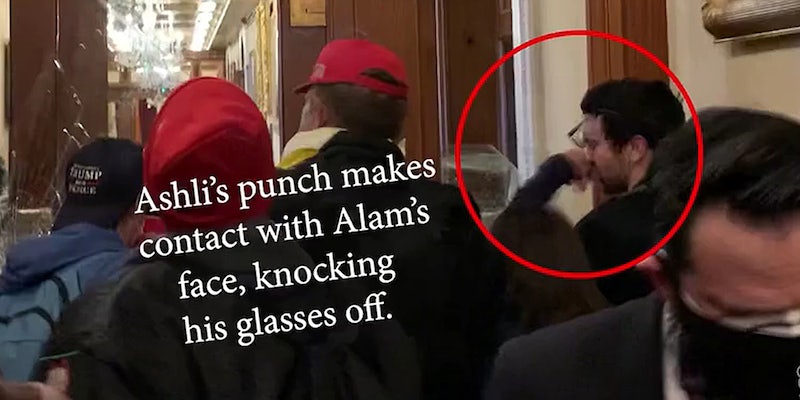 Trump fans now say Babbitt was trying to keep the window she entered from being breached.

Supporters of former President Donald Trump have developed a new conspiracy theory in order to paint Ashli Babbitt, the QAnon believer who was shot while storming the Capitol on Jan. 6, as a victim and a martyr.

In a tweet thread on Tuesday, self-described independent journalist Tayler Hansen alleged that Babbitt had actually been attempting to stop her fellow rioters from breaching a barricaded entrance leading to the Speaker’s Lobby.

Hansen claims that Babbitt can be seen punching a rioter named Zachary Alam “in an effort to stop him from breaching the window.”

“She was trying to stop the attack on the windows and was visibly frustrated with Police inaction,” Hansen alleged.

The tweet alleges that she also grabbed’s Alam bag, which was followed directly by a punch, implying she was attempting to stop him from breaching the glass.

Another narrative, as noted by PolitiFact, suggests that Babbitt was attempting to breach the window in order to escape “antifa” members. But no one that day, including Alam, who has since been charged for breaking the window, has been found to have ties to anti-fascist activists

Hansen’s entire premise is based on several unproven assumptions. For starters, Hansen’s claim that Babbitt was attempting to keep the window from being breached is backed by no actual evidence given that her intentions at that moment were unknown.

The claim that Babbitt was “visibly frustrated with Police inaction” is also an assumption with no backing.

“Ashli was actively trying to de-escalate the situation, was never violent, and didn’t break a single thing,” Hansen added.

But throwing a punch at a fellow rioter, while not directed at police in that moment, doesn’t track with “never violent.”

Unsurprisingly, Hansen’s thread fails to mention that Babbitt was ultimately shot while trying to climb through the broken window herself. Hansen’s assertion that Babbitt did not want the window to be breached would seem to be entirely disproven by her attempt to do just that.

Capitol Police officer Michael Byrd shot and killed Babbitt while attempting to keep the mob, which was attempting to break through the barricade, from reaching politicians who were being evacuated. The shooting was investigated and later deemed to be “lawful and within Department policy,” clearing Byrd of any wrongdoing.

Despite Hansen’s attempts to ignore Babbitt’s attempted breach of the window in an apparent effort to clear her of responsibility, conspiracy theorists latched on to the new narrative.

Numerous users suggested that the clip proved that the entire story surrounding Babbitt’s death had been a “lie,” while others argued that her death was a clear case of murder.

Ian Miles Cheong, a prominent pro-Trump conservative who comments on American politics from Malaysia, likewise attempted to frame the footage as some sort of bombshell revelation.

“The media fed us a lie for an entire year,” Cheong said. “This is what actually happened with Ashli Babbitt.”

The attempt to rewrite Babbitt’s history is nearly identical to conservative efforts towards the entirety of Jan. 6. Instead of taking blame for the death and destruction caused that day, Trump supporters have attempted to pin it on everyone but themselves.