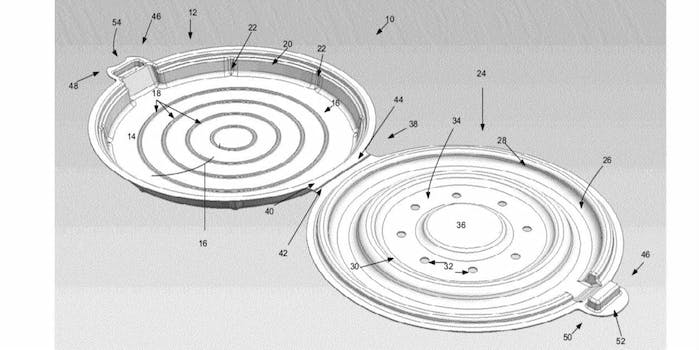 This pizza box was created and patented by Apple

The iPizza? The MacBox Air?

When Apple isn’t working on its upcoming iPhone or prepping an update to its MacBook line, it’s probably off fixing the inefficiencies of our world’s paper products.

Its latest invention is a circular receptacle that prevents pizza from getting soggy.

As you can see, the innovative container uses a fan-less solution to allow air to circulate through its ergonomic cylindrical design. Its concentric rings are used as a liquid cooling solution for excess grease, while its rigged hinge allows the lid of the uni-body device to be lifted with one hand.

OK, enough of that. It’s a pizza box with holes in the top of it.

Apple felt its invention was so brilliant and original that it filed a patent for its design back in 2010. The pizza circle was rediscovered by Wired during its exclusive look at Apple’s new spaceship campus, which may or may not have been inspired by said pizza box.

The patent lists Francesco Longoni (an Italian, go figure), the head of Apple’s food services team, as one of the inventors of the pizza container. Wired says it was created to let employees take pizza from the cafeteria back to their desks. The holes in the top of the box let air out, and are supposed to keep the crust from getting soggy.

The box, which we’ll name iPizza, or perhaps MacBox Air, was spotted on Twitter in a tribute to the late Steve Jobs.

@mantia @panzer the Caffè Macs pizza box is nice and when Steve Jobs died was signed by many Apple Food's employees pic.twitter.com/wG5A63C3xc

It’s a shame Apple is helping tank paper sales, because it already has a pretty solid resume in the industry.