Seriously, where is Kim Kardshian: Hollywood!?

If you opened up the App Store this morning, you were greeted by a big “Best of 2014” banner. Here Apple has collected its best apps and games of the year, with top honors going to Elevate (a supposed “brain training” app) and Threes!. 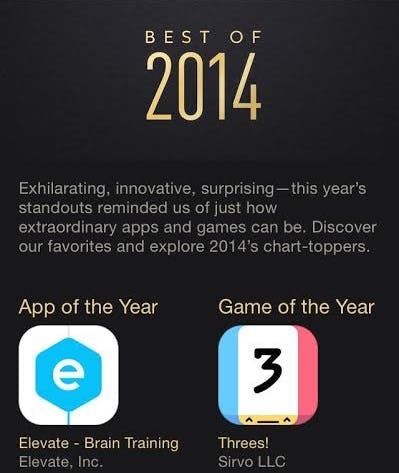 There are a handful of apps that absolutely deserve such a coveted spot: Instagram’s Hyperlapse was the runner-up for best app, 1Password makes the cut, as does SwiftKey. But some of the winners are hardly the “best” anything. (It’s an interesting time to call Uber a best app, and Facebook’s Paper app, though beautiful, was a flop.)

More egregious than the inclusions, though, are the omissions. It’s impossible to list every app that should have made it, so here are the top 10.

This app for couples makes sexting more fun and less skeezy, and it’s become a favorite for those who want something like Tinder, minus the creep factor… and plus the monogamy.

Google’s new email experiment (or the evolution of Gmail that you can’t stop even if you wanted to) has been on fire, and people are still clamoring for invites. Of course, there is no way in hell Apple would give Google that free PR.

This was the year of the chat app, but FireChat’s mesh network technology made it a communication tool for users in China and the Middle East who were otherwise unable to tell their stories.

The Dots successor might not have made the splash the original game did, but it’s just as addicting and has enjoyed a spot in the top apps section all year.

As easy as it is to make fun of this app, no one can deny the influence it’s had. The single-use, novelty app is more than just a Product Hunt staple; it’s a momentary phenomenon (for better or worse).

The college-kid-only app may not have launched in 2014, but it certainly rose to prominence in the past year. Like Whisper and Secret, Yik Yak is enjoying its own controversies, but that hasn’t stopped it from becoming to today’s college students what Facebook was to all of us in the early aughts.

Finally, finally, finally, Google Analytics is available on the iPhone. Again, obviously Apple wasn’t going to send promotion Google’s way, but it deserves to be in this list.

Photo via PhotoAtelier/Flickr (CC BY 2.0)