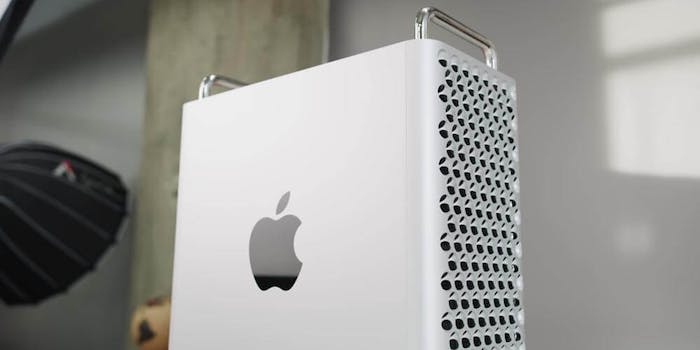 Ready to dish out $52K for Apple’s new Mac Pro?

Apple's 'cheese grater' Mac is the most expensive and tricked-out one ever created.

Apple’s new Mac Pro desktop computer went on sale Wednesday for an eyebrow-raising $5,999. But if you think that’s expensive, just wait until you learn how much a fully upgraded model is: $52,599.

Did we mention that price doesn’t even include a screen?

Users looking to order the new computer were shocked when looking at upgrades, many of which cost more than the entire base model itself.

For example, if you want to upgrade that standard processor to the high-end 2.5GHz 28‑core Intel Xeon W processor with Turbo Boost up to 4.4GHz, that will run you an additional $7,000.

And if you want 4TB SSD storage, that’s gonna come in at $1,400.00. But it doesn’t stop there. What if you want to add wheels onto your tower, buy a better mouse, get a decent screen, and utilize the Apple afterburner card for even better performance?

If taking into account the fact that the computer is capable of running seven high-end screens as well, you could theoretically throw a whopping $101,585 at a new computer.

This, of course, doesn’t take into account the fact that even better upgrades will be available in the near future. Apple says an 8TB SSD storage option will be added alongside even better graphics cards.

To be fair, this computer wasn’t built for the average internet user but for professionals, such as video editors and animators who need freakishly fast processing power. So don’t be upset that you can’t buy Apple’s most expensive and tricked-out Mac ever created.