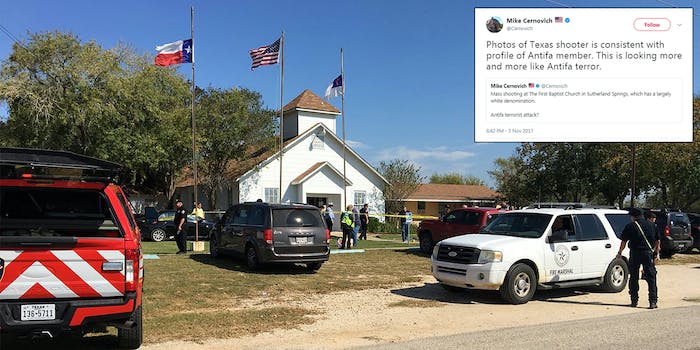 Blaming controversial leftist collective “antifa” has now become part of the post-mass shooting narrative for members of the far-right.

While there are still a number of unanswered questions about the shooting in Sutherland Springs, Texas, on Sunday that left 26 people dead—including eight members of one family—that hasn’t stopped far-right personalities from speculating about the motivations of Devin P. Kelley, 26, whom authorities say carried out the attack.

On Sunday, far-righters such as Mike Cernovich and InfoWars host Alex Jones began pushing the unverified idea that Kelley carried out an “antifa attack.” No motive for the massacre has been released by authorities as of Monday morning.

The antifa narrative is consistent with past attempts to label other mass shooters as members antifa, a loose collection of protesters whose confrontational and sometimes violent tactics have become a target for the right as they have become more visible since the election of President Donald Trump.

Sunday was no different.

“Mass shooting at The First Baptist Church in Sutherland Springs, which has a largely white denomination. Antifa terrorist attack?” Cernovich tweeted, later adding: “Photos of Texas shooter is consistent with profile of Antifa member. This is looking more and more like Antifa terror.”

Meanwhile, Jones tweeted the conspiracy theory since shortly after news of the shooting began pouring in. The InfoWars host, who routinely pushes unverified reports and has propped up numerous conspiracy theories, has more than 740,000 followers on Twitter.

“Was this part of the Antifa revolution against Christians and conservatives or a Isis op? Live from the church,” Jones tweeted, later adding in a series of tweets: “Antifa follower Devin Kelley identified as Texas church shooter! Dressed in all black… left now celebrating! Antifa killer attacks Texas church killing 26 fulfilling the groups dream for violent revolutionary action!”

Reddit‘s The_Donald, a notorious pro-Trump forum, also has been discussing the unverified idea that Kelley was a member of antifa. On Monday morning, a thread on the front page of the subreddit had the headline: “ANTIFA discusses attacking conservative churches! MMMM whats the betting on the Texas shooter being an ANTIFA soldier!”

Following the shooting in Las Vegas, where, police say, Stephen Paddock opened fire on a group of concertgoers from a window of the Mandalay Bay hotel early last month, killing 59 and injuring more than 500, a similar attempt to paint him as a member of the group unfolded online.

Police have found no connection between Paddock and antifa.