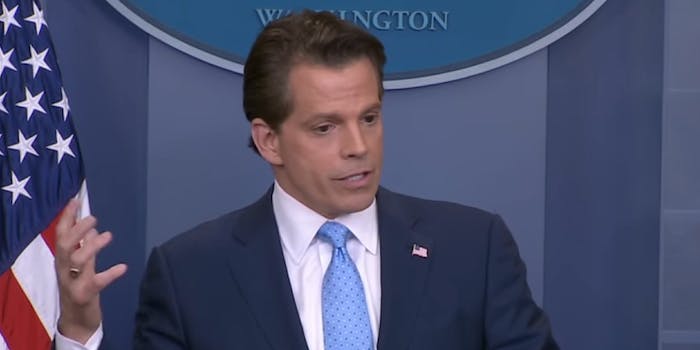 One potential replacement was scratched off the list of contenders.

Trump was asked by the hosts of Fox & Friends about Saramucci—who had a brief stint in the White House in 2017—replacing Sanders after she leaves her post at the end of this month.

The president announced that Sanders was departing the administration in a series of tweets on Thursday afternoon.

“Well, I like Anthony, and he’s been very nice and all, but I think Anthony should stay where he is right now,” Trump said during his interview on Friday morning. “Anthony’s doing a good job and let’s keep it that way for a little while.”

“I like Anthony…but I think he should stay where he is right now,” Trump says, with a chuckle, when Fox News asks about @Scaramucci for press secretary.

“Stephanie is terrific,” he says of the 1st lady’s spokeswoman, @StephGrisham45. “We have a lot of people to choose from.”

The president then praised Stephanie Grisham, the director of communications for First Lady Melania Trump, as “terrific” and said the White House has “a lot of people to choose from” to succeed Sanders.

Scaramucci served as the White House communications director for around 11 days in the summer of 2017. His tenure was marked by a number of viral moments.