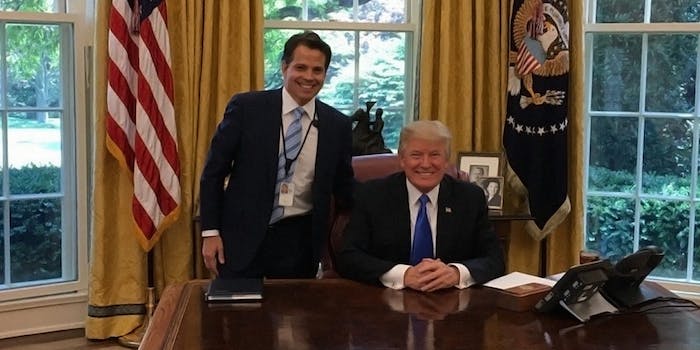 Anthony Scaramucci is out—and the memes are in

Anthony Scaramucci, an Icarus of a political operative, who in one short week rose from political neophyte to Trump Svengali, flew too close to the sun and is now out as White House communications director.

Scaramucci’s tenure was as brief as it was vulgar as it was beloved by the internet. No one thought that Sean Spicer‘s meme-ability as a White House official could be topped, but the Mooch did it.

From the internet unearthing his tweets excoriating Donald Trump to his profane press interactions to his spot-on emulation of his boss’ hand gestures, almost everything Scaramucci did went instantly viral.

Hey @ABC, I got your new Bachelor right here. pic.twitter.com/Zsett6WH9Z

There was also this oldie (a week ago), but a very good goodie.

I’ll leave the photoshopping to the experts. pic.twitter.com/Jj1nk0P2mv

Karma is a Mooch. https://t.co/hbuzqLfDi7

In fairness, Mooch did say the leakers would get fired.

mooch ado about nothing

Then, all of a sudden, there was a backlash to the Mooch bliss, as some said we should actually feel bad for Mr. Scaramucci.

In all seriousness, this is a sad story. Not a laugher. Guy sold his company, divorced his wife, didn’t see his kid's birth, for…. this.

Won't someone think of the morally vacant hedge fund manager

Farewell, Mr. Mooch. The internet is poorer for your absence.