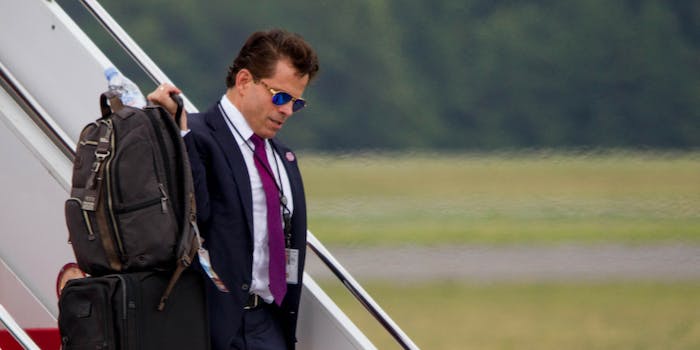 Anthony Scaramucci has been banned from the White House

Scaramucci is not alone.

As the Donald Trump administration continues to hemorrhage its most trusted aides, some of those who want to return to see the president are being told they can’t.

According to Bloomberg, Scaramucci, who lasted 10 days as the White House’s communications director before he was unceremoniously fired by John Kelly, is on an “administrative exclusion list,” meaning he’s not allowed to visit the White House unless he receives special approval.

Scaramucci said he thinks Kelly is the one keeping him from visiting Trump, and considering Scaramucci has lobbied to get Kelly fired, that makes a bit of sense.

According to Bloomberg, “Anyone who failed a background check, was fired, or was asked to resign faces the same restrictions, and a similar ‘administrative exclusion list’ existed in the Barack Obama and George W. Bush administrations, the White House official said. The official said the White House counsel’s office manages the exclusion list and adds all employees who are fired.”

Either way, Scaramucci isn’t pleased with the developments, particularly because he still supports Trump and considers him a friend.

Scaramucci also referred to Kelly as “General Jackass.” But hey, at least Scaramucci has kept his sense of humor.