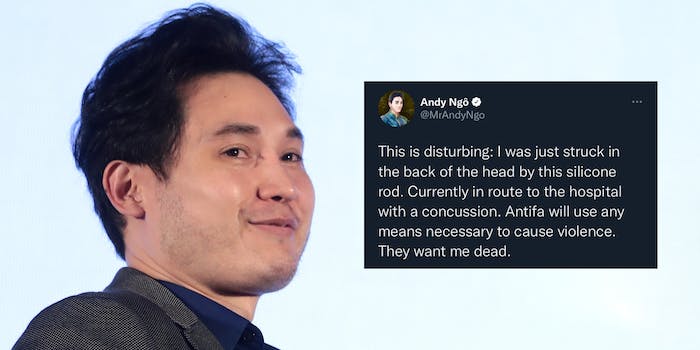 He was NOT hit.

Ngo, a right-wing content creator with a slavish devotion to hyping the threat of antifa across the country, was NOT pelted with a silicone prosthesis made in the shape of a male sex organ.

No, what happened is that Ngo, who has a penchant for pushing willful misinterpretations and outright fabrications while working with far-right figures to stoke provocations that he later reports on, was given a taste of his own misinformation.

A screenshot of a supposed tweet from Ngo started floating around Twitter that, given Ngo has wildly exaggerated being attacked with benign projectiles before, people believed.

“This is disturbing,” the image read. “I was just struck in the back of the head by this silicone rod. Currently in route to the hospital with a concussion. Antifa will use any means necessary to cause violence. They want me dead.”

But per Ngo on Twitter, it is false. False.

“Following the publicizing of videos showing antifa organizing violence, assaulting women and press in Portland yesterday,” Ngo said. “They made a fake tweet.”

Then again, given how much of Ngo’s posts have later been proven to be inaccurate… can we really trust him here?