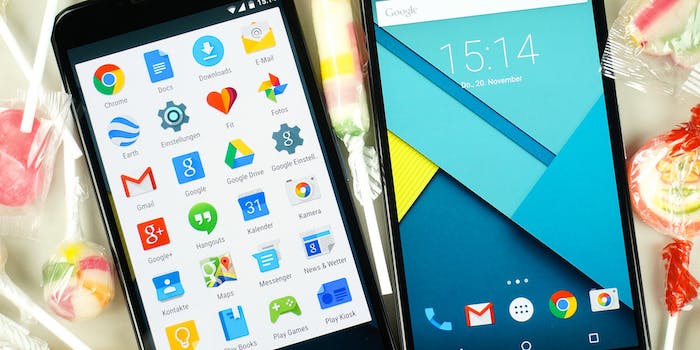 If it sounds familiar, it's because it's just like Apple Pay.

Android users will soon be able to pay for things without opening a mobile app. Google on Thursday announced Android Pay, a mobile payment system that uses near-field communication (NFC) and lets users tap their phone on a point-of-sale terminal instead of swiping a credit card.

Like Apple Pay, which launched last fall, Android Pay uses Host Card Emulation (HCE): It doesn’t store your personal credit card data, instead processing payments by creating a one-time-use card number that corresponds to your credit card. This way, Google won’t have access to your data—and neither will anyone who manages to get their hands on your phone.

Android Pay will be available for any device running Android 4.4 (KitKat) and up. At launch, it will be accepted at 700,000 stores in the U.S., including major retailers like Macy’s and McDonald’s. Major cell carriers including AT&T, Verizon Wireless, and T-Mobile will pre-install Android Pay on their NFC-enabled devices. An Android Pay API will also make in-app purchases significantly easier.

This isn’t Google’s first attempt to get mobile payments to catch on among Android users. Google Wallet was the company’s first mobile payment system; it stored your payment data in your phone and worked with thousands of retailers across the country. But after its 2011 rollout, it failed to gain traction.

Now that Apple Pay has popularized NFC phone payments, however, Android Pay might be adopted more quickly than its predecessor. It’s still unclear what will happen to Google Wallet; according to the New York Times, it will be converted into a peer-to-peer payments app, similar to Square and Venmo.