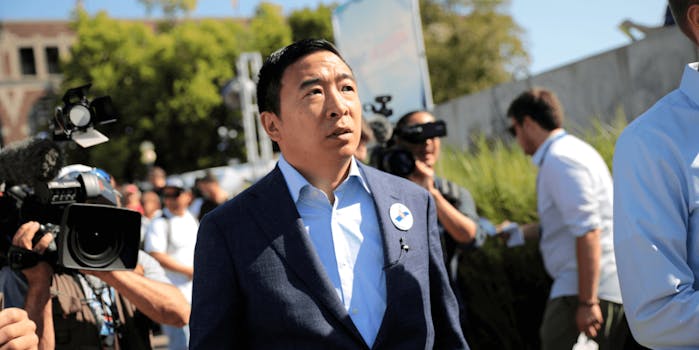 Why do the rich and famous support Andrew Yang?

I live in Hollywood, but you don’t have to take up permanent residence in the liberal bubble to know that this is true. You don’t have to look far on Twitter to find a celebrity espousing contradictory or ridiculous views. This is part of the reason why dunking on celebs has become our new national pastime. Finding an odd celebrity political opinion is as easy as finding a plumber in Jane Lynch’s bathroom.

Yang may be running in the Democratic primary, but his policies and his base bear more resemblance to libertarian Ron Paul than a progressive Democrat. Yang’s signature UBI scheme is actually fairly conservative. His plan to give every citizen $1,000 a month requires beneficiaries to choose between the money and programs like food stamps. It would also be funding by a VAT rather than a wealth tax. Though there are progressive proponents of UBI, this is a regressive, libertarian approach that has been criticized by many left-leaning economists, even those who support UBI.

If you take away UBI, you find that Yang’s policies—he lists dozens on his site—run the gamut from centrist to fairly conservative. What liberal policies he does support are incremental, more closely aligned with Sen. Amy Klobuchar (D-Minn.) than Sen. Elizabeth Warren (D-Mass.). For example, Yang opposes Medicare-for-all (despite claiming otherwise) and the Green New Deal.

It is an open secret in La La Land that many celebrities skew fiscally conservative. Among the truly rich and famous, you find a lot more support for Pete Buttigieg than Sen. Bernie Sanders (I-Vt.). And while it remains unfashionable to be an outright conservative unless you have the good old boy action hero brand of Chris Pratt or John Krasinski, it makes sense that people who are fabulously wealthy might want to remain that way.

Conservatism is particularly seductive to men who became famous at a young age. If you are rich, it is nice to believe that we live in a meritocracy and that your success came from 100% hard work and 0% privilege. Even if the wealth of Papa John, Elon Musk, and Larry the Cable Guy is clear evidence to the contrary, bootstrapping has long been part of the American myth.

After all, America is John Steinbeck’s nation of “temporarily embarrassed millionaires.” The rich, of course, are no longer embarrassed and just as NFL quarterbacks and CEOs skew Republican, Hollywood celebrities have an undeniable economic conservative streak.

Look at Yang’s four highest-profile celebrity endorsers and donors: Donald Glover, Dave Chapelle, Nicolas Cage, and Rivers Cuomo. Glover became a staff writer on 30 Rock at age 23. Chapelle was not yet 20 years old when he was featured on ABC’s America’s Funniest People. Cuomo was just 24 when Blue Album was released. Cage was a movie star by the time he was 20.

Unless we are counting the bullshit jobs one gestures at in their teenage years, it is safe to say none of these men have ever had a “real job,” and have not known serious economic hardship or struggle in their adult life. And as their entire adult lives have been charmed ones, they may believe, like Tom Brady and Jeff Bezos clearly do, that they are entirely the product of their hard work and not at all a product of privileges and luck.

Yang’s platform is seductive to this kind of man in part because Yang is this kind of man. After a short stint as a corporate lawyer, Yang started a company specializing in celebrity-affiliated philanthropic fundraising. From there, he served on the board of a health startup before making his real fortune with the test preparation company Manhattan Prep. While Silicon Valley bootstrapping may have its lean moments, it is a very different thing than the actual work experience of most Americans, especially if you have a law degree and two parents with advanced degrees to fall back on.

As with a number of candidates in the race, Yang’s platform reflects Yang the man. His key policy proposal of offering $1,000 a month to citizens in exchange for a social safety net has the feeling of a Lucille Buth-created policy. How much could cost of living be, Michael? $1,000?

Anyone who has actually been in proximity with poverty knows that while cash is one of the best things you can give to the poor, such a program only works if there is a supportive welfare state assist in allocating it. Yang’s policy, as John Ganz recently wrote in the Outline, amounts to “If I give you some money, will you leave me alone?”

The rest of Yang’s policies reflect the concerns of someone who has a healthy gap between themselves and the actual struggle. On big economic issues, like healthcare and student debt, Yang supports half-measures when compared to Sanders or Warren. To appear more progressive than he is, Yan clogs the rest of his platform with less consequential issues that are functionally baubles that appeal to people with no skin in the game such as his call for the transformation of abandoned shopping malls and ending robocalls.

This isn’t to say that these smaller ideas wouldn’t be lovely to implement, but that their appeal to Yang’s supporters functions the same way as someone who carries around a Malcolm Gladwell book or wears a Rick and Morty T-shirt. It is meant to signal how clever and above the fray of politics of usual their candidate is, and by extension, they are. They have nothing to do with solving systemic inequality because this isn’t something Yang or his supporters are actually invested in

Smartly, Glover has been slow to actually articulate why he supports Yang. Yang’s candidacy is very much at odds with the politics of Glover’s hit show Atlanta, and it is telling that while the actor/writer/rapper has made public appearances with Yang, including a West Hollywood clothing pop-up, he hasn’t clarified what about the candidate excites him.

Though Glover is Yang’s “Creative Director,” it’s unclear what Glover sees in Yang.

Cuomo may also be aware of the disconnect between his reputation and Yang’s policies. While Cuomo has performed at a Yang event, he has not officially endorsed his candidacy. It does bear mentioning that while Weezer is beloved by alternative communities across the millennial generation, the band’s work has never been particularly political unless you consider nerds a protected class.

There is less dissonance between Chapelle’s art and his endorsement of Yang, which came on Jan. 14. Chapelle has taken some deserved flack for his swerve into conservatism in recent comedy specials. His jokes about Me Too were rightly criticized as misogynistic, but they also demonstrate a willful misunderstanding of how power dynamics work. Despite the sharp political intelligence of Chappelle’s Show, the comedian’s more recent work demonstrates an inability to distinguish between oppressor and oppressed, most notably in his anti-trans material.

Chapelle in many ways is the platonic Yang supporter. Fame has insulated him from many of the experiences of the people who exist in the world around him. Given how young he found fame and how long ago that was, it is understandable he sometimes appears out of touch. We can debate whether or not that is acceptable for an artist, but we can agree that it is unacceptable in a presidential candidate.

This is not to say that all Warren or Sanders supporters have had a particularly difficult go of things. It’s hard to imagine that Emily Ratajkowski and Shailene Woodley have had it rough. But, it is worth noting that prominent male progressives like Rob Delaney, Danny DeVito, and Danny Glover did not find fame and fortune until their 30s or later. Sanders’ highest-profile celebrity supporter, Cardi B, worked as a stripper before she became famous.

While Hollywood elites have spread their support across the center-left spectrum, Hollywood assistants tend to support Warren or Sanders. I can speak from a position of authority on the topic because I served as the political coordinator for a union of Hollywood assistants (IATSE 871) throughout 2019. Not one union member I spoke to supports Yang. Given that many of these assistants make less than $15 an hour, it isn’t hard to see why $1,000 a month in exchange for the social safety net looks like a raw deal.

Celebrities, it turns out, are not just like you and me. And as such, they have different ideas about politics. Even if a celebrity is ostensibly liberal in their art, it might be a different story when it comes to how national events affect their bottom line.