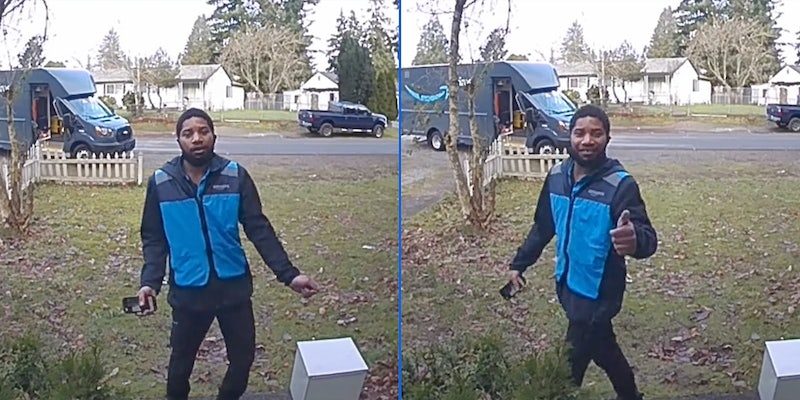 'Why? So you can be entertained for free.'

In a TikTok posted on Jan. 18, an Amazon customer says she put a sign outside her door asking delivery drivers to dance while being filmed on camera.

“This guy was awesome,” Leah (@its.just.leah) says of an Amazon delivery driver who is seen dancing. “Anyone know him??”

She set the video to Cali Swag District’s “Teach Me How to Dougie.”

The driver, @djeli253ent, commented on the video telling Leah to “stay giggin” and thanked her for posting the video. His employer, Amazon, also commented.

The TikTok received over 2 million views, and was received disparately by commenters. Some found it endearing, while others felt the TikToker was asking too much from delivery workers.

“We need to blow him up,” @carmen_xx88 commented. “Did you have music gojng? He just straight gettin down.”

“You can tell when someone is a happy person,” @ericasgirlyworld wrote. “So cool!”

“Like they not working hard enough you’re out requesting extra dances,” @crabyapple commented.

“What possible reason would someone need these drivers to dance for them,” wrote @maryclark5441.

“Why?” @casiepriest commented. “So [you] can be entertained for free.”

Others echoed’s Leah’s comment about getting the driver a raise.

“Employee of the month,” @vilyampier commented.

“He needs a bonus,” @thebrowningpartyof2 wrote.

“Go on Amazon and rate the driver,” @anerd11 suggested.

@twizzleman31, who identified himself as a delivery driver, said he wishes people he delivered to would put signs up for him to dance. “I would throw down,” he commented.

The Daily Dot has reached out to @its.just.leah via TikTok comment.