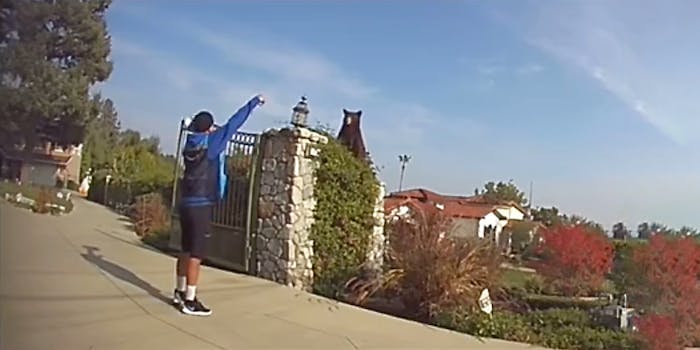 ‘Getting written up by Amazon must be worse than being eaten by a bear’: Viral TikTok shows Amazon driver delivering to house even though bear is outside

'If you don’t do the delivery they make you fight bears at the warehouse anyways.'

Amazon delivery drivers have been captured working through treacherous conditions, such as tornados and floods, in the past. But a video recently posted to TikTok shows a more peculiar—but nevertheless treacherous—situation one driver found himself in.

In the video, which was taken from Ring doorbell footage, an Amazon driver delivers a package to a house while a “giant bear” is outside, in the front yard.

The video’s origins are unclear as it was reposted to TikTok earlier in the week by the TikTok account @tiktoksoso595. It’s been viewed over 4 million times since.

In the video, the driver approaches the front gate to the customer’s home. The customer, over the Ring camera, pleads with the driver: “Stop right now; there’s a bear right there!”

“That’s a bear. Back away. Go back to your car; that’s fine,” the customer continues.

Despite the homeowner’s objections, the Amazon driver persists, simply putting his hands in the air, above his head, to successfully scare off the creature. The bear scurries away in the opposite direction.

Once the bear is far enough away, the driver completes his delivery. The customer laughs through the camera.

In the comments section, many viewers joke about the driver’s determination to finish the job and dig at the alleged working conditions at Amazon. The company has been accused of making workers work through life-threatening conditions. Amazon was recently sued by one family who alleged Amazon made workers continue to work as a tornado approached one of its warehouses in Edwardsville, Illinois, in December. Six workers reportedly died at the facility.

“Getting written up by Amazon must be worse than being eaten by a bear!!” one viewer said.

“I worked for Amazon and if you don’t do the delivery they make you fight bears at the warehouse anyways,” another joked.

Some of the comments, however, were more entranced by the worker’s survival tactic. “Somebody paid attention to the Discovery Channel,” one speculated.

The Daily Dot reached out to Amazon via email.