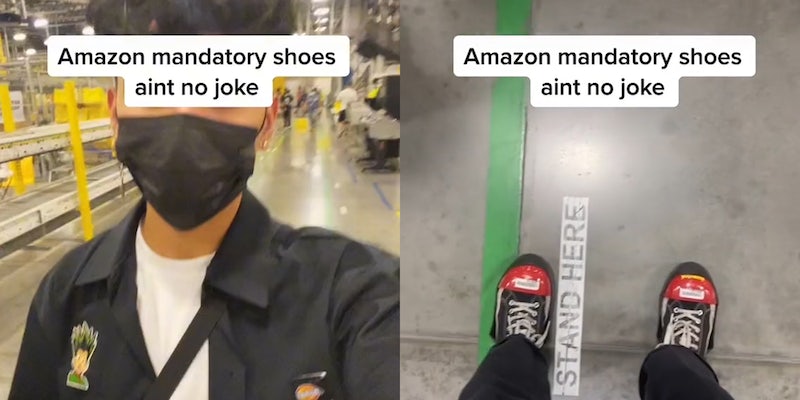 ‘Like SpongeBob when he went to the dance’: Amazon footwear requirement get roasted on TikTok

'They want us to work 10 hrs straight with clown shoes.'

Amazon workers routinely post observations and complaints about working at the massive company. Some are terrifying, such as the driver who made a delivery in spite of a bear being nearby. Others simply showcase the mundane realities of working for Amazon.

One Amazon worker’s TikTok about how they really feel about the company’s mandatory footwear is going viral.

On Wednesday, TikToker !Alexiz! (@futurealexiz) posted a clip of himself and his coworkers walking inside an Amazon facility. The camera is primarily trained on their feet.

In the TikTok, Alexiz wears a foot covering over a pair of P.F. Flyers.

One person asked, “My g are those ‘toes on the go’?? My work made me wear them when I forgot my steeltoes.” Alexiz responded in the affirmative along with several crying emojis.

They appear to be referring to Impacto Toes-2-Go or some similar product.

Many people agreed that the footwear looked uncomfortable and ridiculous. But some felt that Amazon’s shoe guidelines are simply intended to protect workers from injury.

The TikTok clearly stirred some strong feelings about work shoes. As of this writing, it has nearly 150,000 views.

In response to the Daily Dot’s inquiry made via a comment on the TikTok, Alexiz wrote, “Report these nuts.”

Several people who claim to also work for Amazon shared that they were similarly displeased by the shoes.

“No seriously they want us to work 10 hrs straight with clown shoes that’s not comfortable at all,” wrote one.

Those who took Amazon’s side in the great shoe debate argued that the requirement is less about fashion than protection.

“It’s not about the swagg,” wrote one who took this view.

Some pointed out that Amazon provides Zappos shoes for free. Amazon acquired Zappos in 2009.

Alexiz replied in a pinned comment that while he’s “very much aware” of the free Zappos, Amazon told them they could also buy insoles instead of shoes, so that’s what he did.

“They also told us if we didn’t want the shoes to give them away [and] a lot of people did that for Christmas and now they mad cause we [don’t] got em??” Alexiz wrote.

Alexiz said that the company recently changed the footwear requirement, hence the shoe covering he and his colleagues wore in the TikTok.

A few people came to the comments to make jokes. “Going bowling?” asked one. Another teased, “Looking like SpongeBob when he went to the dance.” Alexiz replied, “Deadass.”

He was less jovial about the shoe coverings.

In a caption, Alexiz said he took them off after filming the TikTok. He also included an emoji of the “fuck you” hand gesture.