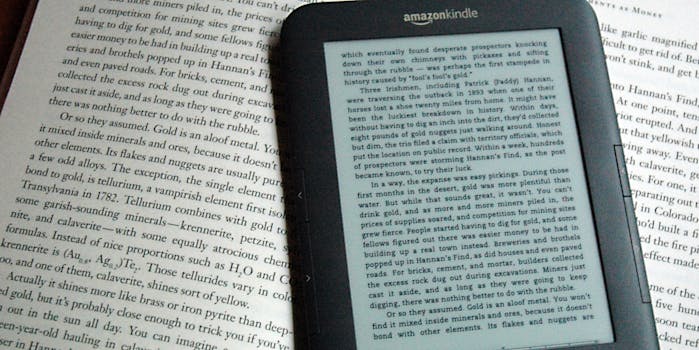 After announcing Prime Music, its music subscription service last month, Amazon has returned to give the same treatment to Kindle customers. The online retailer has announced Kindle Unlimited, an all-you-can-read service that puts over 600,000 books at your disposal.

Major titles available on the service include the entire Harry Potter series, The Atlantis Gene, Kitchen Confidential, 2001: A Space Odyssey. Books on Kindle Unlimited are signified by a badge on their Amazon page. The Spotify-like benefits of Kindle Unlimited aren’t limited to Kindle hardware—Amazon says Kindle Unlimited works on all of its Kindle apps across every major platform. You can try Kindle Unlimited for free with a 30-day trial.

The official announcement follows a leaked banner advertising the service that appeared on the site earlier this week. Despite quickly pulling the pages from its site, Kindle users began to feverishly speculate about the service on online message boards. The official announcement confirms what had previously only been detailed in cached webpages and leaked promotional images.

Amazon did not clarify the opt-in policies of Kindle Unlimited for authors and publishers. The online retailer has been in a tense battle with Hachette, and a number of books from noteable Hachette authors including James Patterson (Invisible), Edan Lepucki (California: A Novel) Malcolm Gladwell (Outliers: The Story of Success) do not have the Kindle Unlimited badge.

Amazon has not yet responded to a request for comment.