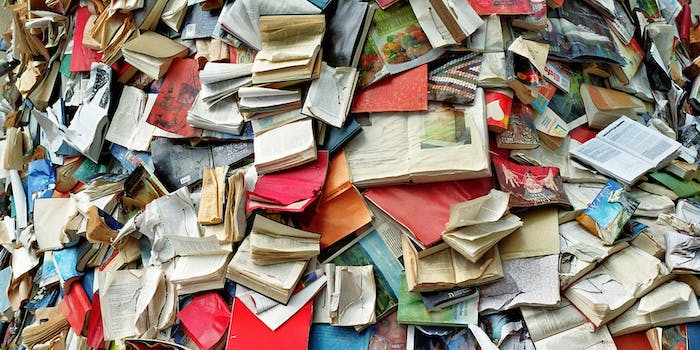 As the Amazon standoff continues, writers are speaking out

It may be the biggest crisis to hit the publishing industry in years.

It’s now been more than two months since Amazon and powerful publisher Hachette began an epic standoff over contract renegotiations, in the wake of last year’s landmark settlement in favor of Amazon against Apple and traditional publishing’s “Big 5.” In what is widely perceived as an effort to pressure Hachette to play with its new, more demanding contractual terms, Amazon has been delaying book shipments, stocking fewer books, and removing the pre-order link from Hachette titles, including J.K. Rowling‘s latest, along with many other Hachette authors.

Because Amazon versus Hachette is just the first of Amazon’s renegotiations with each of the Big 5, the publishing industry is taking Hachette’s role in the dispute very seriously. But the longer the negotiations go, the longer the siege of Hachette’s authors’ sales on Amazon. And as the days stretch with no end in sight, the writers themselves are starting to take sides and formally speak out.

The divide between authors seems to be coming down to those who are traditionally published versus those who are self-published, primarily on Amazon. The negotiations aren’t just about contractual disputes—they’re really about who calls the shots when dictating how books are sold. Many self-published authors have done well by Amazon while thriving in an ebook-heavy market, and are perfectly happy with Amazon’s attempt to wrest more control away from traditional publishing. But while there have been some traditionally published winners in the short-term war, most traditional authors aren’t too happy with the prospect of giving Amazon more power to further erode the book industry.

Earlier this week, the Daily Dot came into possession of an email from the president of the Science Fiction and Fantasy Writers  of America (SFWA), one of the industry’s most prominent professional writers’ organizations.

Written on SFWA letterhead, the email is from SFWA president Steven Gould, praising a letter that member Douglas Preston has been circulating privately for about a week. Gould states that the SFWA board has decided to endorse Preston’s letter and invites other members to join him in co-signing it: 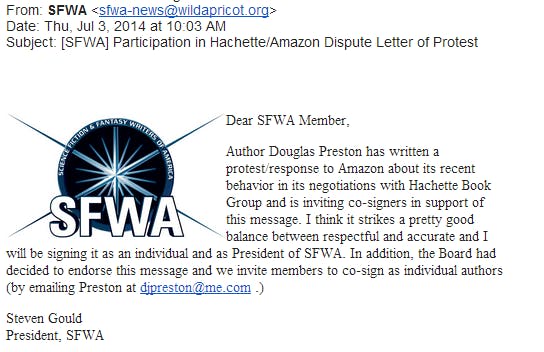 Preston’s letter calls for authors to take a stand against Amazon’s strongarming tactics in defense of Hachette. Although names are still being added to the list, current signees include bestselling Hachette authors like David Baldacci and notable names throughout the industry, like Paul Auster, Geraldine Brooks, and Ellen Datlow.

But not everyone is happy with the SFWA president and board for, essentially, aliigning the entirety of the SFWA’s membership with Hachette in the fight against Amazon.

For years, SFWA has been castigated in the self-publishing community, particularly by authors who support themselves and their families entirely on income from their self-publishing efforts, yet are unable to join an organization of professional writers. The public acknowledgment that SFWA was considering a change helped to smooth some feathers.

So what does SFWA do? It publicly and officially takes the side of traditional publishing, thereby signaling to independent and self-published writers that SFWA doesn’t understand or care to understand their concerns. it’s about as clear a message of “You don’t belong and aren’t welcome” as I’ve ever seen.

Writer Leah Cutter seconded Sakers’ thoughts. “They increasingly don’t represent me as an author,” she wrote in comments of the industry blog The Passive Voice. “And they’ve just called their relevance into question again. They don’t get that big name authors have nothing to do with me down here in the trenches.”

Hugh Howey, a bona fide self-publishing phenomenon who is staunchly pro-Amazon and pro-self-publishing, issued a petition of his own in response to Preston’s. Through a Change.org petition released Thursday directed at supporters of Hachette, Howey put out a call for readers to align themselves with Amazon:

“Stop fighting low prices and fair wages,” Howey wrote to the behemoth traditional publisher. Then, he directed his argument at, well, you (emphasis his):

Amazon, in contrast, trusts you to decide what to read, and they strive to keep the price you pay low. They allow all writers to publish on their platform, and they pay authors between 35% and 70% of the list price of the book. . . .

You may have heard that Amazon and Hachette are having a dispute about how books are sold. The details are complex, but the gist is this: Amazon wants to keep e-book prices affordable, and Hachette wants to keep them artificially high. Higher than for the paper edition of the same story. . . .

It is fitting that Independence Day is upon us. Amazon has done more to liberate readers and writers than any other entity since Johannes Gutenberg refined the movable type printing press.

Howey’s argument sounds rosy, but it neatly sidesteps the grim facts about the ways Amazon has spent years pressuring small publishers to play hardball, using its sizeable revenue from other parts of its retail to drive down prices on ebooks (a tactic known as “predatory pricing“), while establishing a veritable monopoly over the industry that many experts predict will ultimately result in Amazon raising prices dramatically again, once it’s gotten the lion’s share of the business. In fact, Amazon is already raising its prices in the wake of the anti-trust lawsuit.

As a result, Howey’s petition provoked bafflement among many members of the publishing industry:

So Lovecraft, Mieville, Vandermeer and Peake together could never have dreamed up anything half so weird as that petition of Hugh Howey’s.

But it didn’t keep Howey’s petition from making a splash:

Good gracious. Nearly 1,000 supporters already. Our voices are small, except when they overlap. https://t.co/sJN3NZhNff

On his blog, media pundit John Scalzi weighed in to advise people that the situation wasn’t as cut-and-dry as Howey’s petition seemed to indicate:

These businesses and corporations are not your friends. They will seek to extract the maximum benefit from you that they can, and from others with whom they engage in business, consistent with their current set of business goals. This does not make them evil — it makes them business entities (they might also be evil, or might not be, but that’s a different thing). If you’re treating these businesses as friends, you’re likely to get screwed.

Ultimately, although Howey and other self-published authors may see Amazon as the key to liberating authors, it seems as though, at least in the short term, the standoff between Amazon and Hachette is only turning the publishing industry into a house divided against itself.