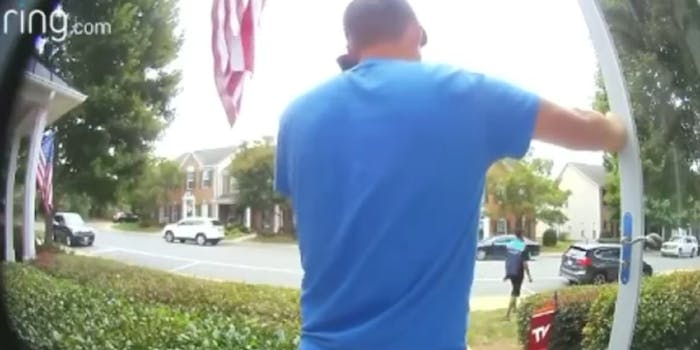 The video led to one employee being fired.

Amazon fired a white employee who confronted a Black delivery driver after a video fraught with racial undertones went viral.

The incident occurred when Amazon driver Nikolas Mayrant was delivering a package to Brad Boynton, who also works for Amazon, in Cornelius, North Carolina.

Mayrant’s sister Heather Rose shared Ring home security footage of the altercation on Instagram, saying, “I know racism is still alive, mean I see it all the time on the internet & it hurts me then, but it’s a little more heart breaking & shocking to see when it’s my blood brother.”

In the video, Mayrant alleged that Boynton called him the N-word, and that Amazon subsequently fired Mayrant. However, in a statement to the Daily Dot, Amazon said it terminated Boyton after an investigation.

It’s unclear how Rose obtained the footage, which appears to be from Boyton’s home. Revolt.TV reported that Boynton sent the footage to Amazon to clear his name over the accusation he used a racial slur.

According to Rose, Mayrant was fired from his job for asking Boynton “why the pics” and walking on his grass after being yelled at and degraded.

However, when contacted, Amazon said Mayrant was not fired and is still employed with Amazon.

Mayrant claimed in a GoFundMe campaign, that has been removed, that Boynton called him racial slurs and accused him of parking his vehicle incorrectly, according to Revolt TV.

“This is nepotism and racism at its finest,” Mayrant reportedly wrote. He said he simply “park[ed] awkwardly on a narrow street” to avoid other vehicles.

In the Ring footage, Boynton can be heard telling Mayrant to “walk the fuck away” and then get pissed off that he walked on the grass. Mayrant can be heard saying that everyone walks on grass.

Then the customer repeatedly yelled what sounded like the N-word, according to Mayrant.

Boynton, who Amazon spokesperson Kelly Nantel confirmed is also an Amazon employee, denies using a racial slur. He claims to have said “Nader, Nader,” which Amazon’s investigation has confirmed was the name of the individual he was speaking with on the phone during the incident.

Rose did not respond to the Daily Dot’s request for comment.