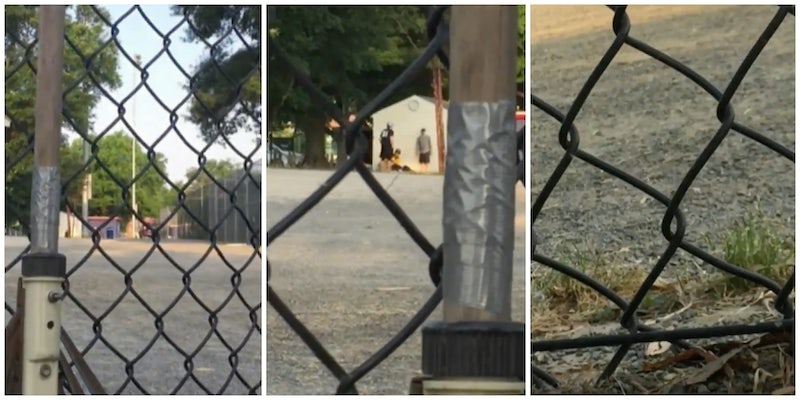 'I’m just lying on the ground holding on to my dogs making sure they don’t get away.'

An eyewitness video obtained by PBS News Hour shows the minutes of panic that ensued when a gunman opened fire on a congressional baseball practice in Alexandria, Virginia, on Wednesday morning.

The unfiltered, nearly six-minute video was shot by Noah Nathan, who told NBC News that he was at the nearby dog park with his two Goldendoodles, Cocoa and Jazz, when the gunman opened fire. The video, which was first posted to Facebook, shows Nathan drop to the ground as gunfire can be clearly heard nearby. Nathan attempts to communicate with others in the area to find out more information.

“I’m just lying on the ground holding on to my dogs making sure they don’t get away,” Nathan told NBC News. “I’m sort of thinking, ‘I hope I don’t get shot.’”

The video below contains strong language, gunshots, and images of injured victims.

Police identified the shooter as 66-year-old James Hodgkinson of Belleville, Illinois. The man’s Facebook profile showed that he was politically active and a supporter of Sen. Bernie Sanders (I-Vt.), whose 2016 presidential campaign Hodgkinson volunteered for. The man also frequently posted negative comments about President Donald Trump.

The Daily Beast reports that he had a history of domestic violence.

Hodgkinson reportedly fired between 50 and 100 rounds before he was stopped. Trump announced during a press conference on Wednesday morning that he died from his injuries.