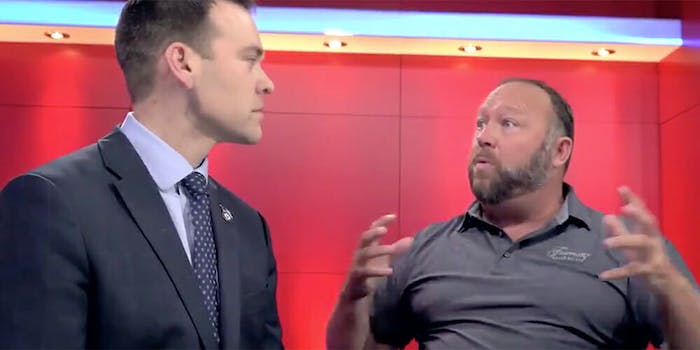 Far-right media personality Jack Posobiec interviewed InfoWars’ Alex Jones for One America News, and the conversation included Jones’ take on Game of Thrones (spoiler alert: he thinks it’s about a “race war” and anti-men), plus some nonsensical criticism of the Star Wars franchise and—of course—liberals.

Alex Kaplan, a researcher for left-wing Media Matters for America, shared a clip of the interview on Twitter on Friday.

So uh Jack Posobiec interviewed Alex Jones about Game of Thrones at One America News yesterday and it somehow turned into attacking Star Wars and liberals. pic.twitter.com/riubjO2BER

Jones first made the caveat that he doesn’t “judge” Game of Thrones fans, who include his family member. And, he said, “I’m usually so busy in the real ‘game of thrones’ that I don’t have time to watch it.” Then he insisted that the show he doesn’t watch has a bigger agenda at play.

“There’s no doubt Hollywood’s pushing all these race war movies, Black against whites,” Jones said. “Whites are evil and racist.”

Considering that Game of Thrones is largely dominated by white characters and that its scarce depictions of people of color are often as slaves or “savages,” it’s hard to imagine the show is pitting an anti-white race war.

“Also pushing women as the bosses, men are bad,” Jones said. “That’s been going on since Married With Children and Fox TV. But Game of Thrones is this post-modernist, everyone is in it for themselves, no one is good. Everyone has given up on chivalry.”

Posobiec then suggested that Lord of the Rings and Star Wars are also “post-modernist” and moving away from “absolutism” of good versus evil.

“The dark side isn’t just evil, it’s saying everything,” Jones said of the Star Wars movies. “It’s saying, ‘do what you want.'”

The clip ends as Jones pivots to his favorite subject to condemn as though it’s a natural segue.

“The left, especially, doesn’t care about facts,” he said.